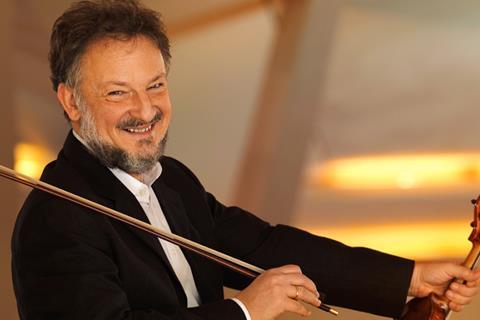 The Berlin Philharmonic has announced the death of Christian Stadelmann, the leader of its second violin section since 1987.

Stadelmann, born in Berlin in 1959, started on the violin aged seven with Charlotte Hampe, to whom he owed ‘a large debt of gratitude’ he said, for guiding him until it was time to enter the Hochschule der Künste. There he learned with former Berlin Phil concermaster Thomas Brandis.

His only long-term project as ‘first’ violin, was as part of the Vincent piano trio.

He was eloquent in explaining the special role of the second violins, and the unique challenges that come with that role: ‘We second violins always have to find the right balance: on the one hand it’s necessary to give our part an independent profile (which because of its lower register is often not easy), but, on the other, we also frequently have the task of mediating between the first violins and the rest of the orchestra in order to foster unity,’ he said.

‘You can actually see that in the two seating arrangements in which we operate: either outside, opposite the first violins, where independence is emphasised; or inside, where it’s much easier for us to promote good ensemble playing. And, because it’s so hard to reduce these two aspects to a common denominator, not every violinist can become a second.’

He died on 26 July after a serious illness at the age of 60.

Berliner Phil colleage Knut Weber said: ‘The early death of Christian Stadelmann has affected us deeply. Not only was he an outstanding musician, but for more than twenty years he represented the Berliner Philharmoniker as a member of the “Fünferrat” (council of five). In addition, as a teacher of the Karajan Academy, he trained numerous young violinists, some of whom are now members of our orchestra themselves. In Christian Stadelmann, we lose an exemplary musician and a wonderful colleague who will remain in our memory not least because of his warm-hearted, humorous nature.’