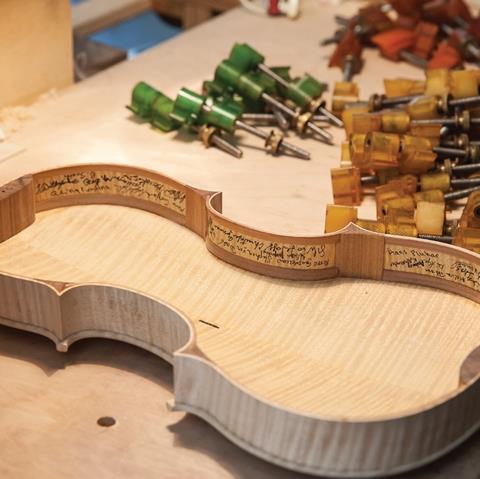 The following is an extract from The Strad’s Oberlin Workshop 2015 feature, published in the March 2016 issue – download on desktop computer or through The Strad App.

Violin making is without doubt one of the most traditional of crafts. The general shape of the instrument has remained unchanged for more than four centuries, and the tools, techniques and materials used for the construction and varnishing of stringed instruments have evolved little during that time. Our enduring preoccupation with great 17th- and 18th-century Italian instruments, and the obsession among makers with discovering how the master luthiers made their creations, are so inherent in the story of violin making that today the success or failure of a modern violin continues to hinge on how accurately it mimics a 300-year-old Italian masterpiece. US maker Joseph Curtin once remarked that this process of copying classical instruments made him feel like a ‘Civil War re-enactor’.

To an extent this practice is to be admired. But by slavishly recreating a relic from the past, are contemporary makers limiting their potential to develop new ideas and make improvements in the field? This was the question put forward at last June’s Violin Society of America/Oberlin Violin Makers Workshop – an intensive two-week summer practical course for professional makers at Oberlin College, Ohio, which since 1998 has provided a space for leading luthiers and graduates to meet and share ideas, techniques and research. The question had first been aired at Oberlin by US maker Tom Croen, who noted that in the case of many Cremonese makers who came through the workshop of Nicolò Amati, and who learnt his techniques and inherited his designs, their individual style is still observable despite their use of the same templates for many years. What would happen if you gave a group of established makers the same template and instructed them to each make a violin?

In 2014, makers Hugh Withycombe and Paul Crowley put this question to the test by developing a generic violin form – a wooden interior mould, without corners or other design elements, into which the blocks would be glued and ribs bent around – that could be modified by each maker into a unique, individualised violin model. That generic model was dubbed the ‘Obie 1’.

The complete Oberlin Workshop article is published in The Strad’s March 2016 issue – download on desktop computer or through The Strad App.

Read: The alchemy of the madder root in The Strad January 2020 issue. Hugh Withycombe and Guy Harrison share the results of their experiments made at the 2016 ‘Obie 1’ violin project in Oberlin to extract and prepare madder root for the creation of pigment for varnish.