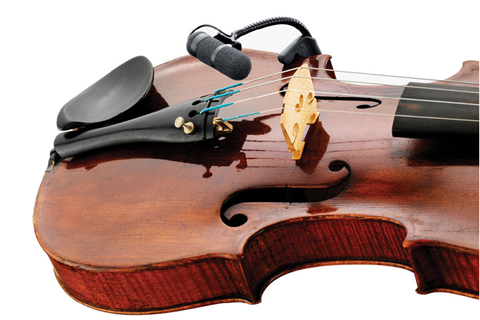 A violin fitted with a DPA microphone

This article is from The Strad’s Accessories 2018 supplement, published with the June 2018 issue

Many classical string players will require amplification at some point, with the typical musician much more likely to pursue a portfolio career of assorted freelance work than a steady job in an orchestra. If that moment has come for you and you’re wondering what amplification options are available, you will find that there are many. This article cannot tell you what the best product is, because unfortunately the question is as complicated as, say, what strings you should use. However, it should help you make an informed decision, and the only way to do that is to pinpoint what your needs are and which needs are most important.

There’s no such thing as a typical reader of The Strad, of course, but let’s narrow things down a little by focusing on violin, viola and cello players who primarily play unamplified but wish to have the option to plug in for certain gigs. Double bassists have a different set of gear available to them, but the essential principles are the same when deciding between different classes of product. 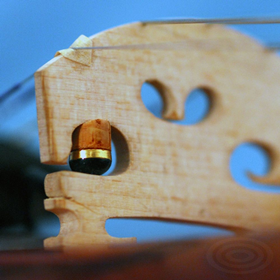 The Schertler Stat-V is a contact microphone rather than a pickup. It is among the easiest to install and de-install, so may appeal to those who mostly play their instrument acoustically

Let’s start by asking a few essential questions. What kind of music are you going to play? And crucially, how loud are the instruments you’re playing with? If you’re only playing with other acoustic stringed instruments, in a string quartet or folk band for example, you may make a different decision from if the decibel level goes up with brass and percussion or electric guitars. The volume factor will also determine how crucial it is for your instrument to sound as natural as possible, in other words like it does acoustically but louder. This is, unfortunately, by no means guaranteed.

The next important question is: where are you going to be performing? If you’re playing in a quartet in the corner of a large function room, for instance, you may assume that placing a few microphones around the group will do the trick – but have you considered that they will also pick up the sound of people talking, laughing, scraping plates and clinking glasses? Another big issue is whether you expect to be playing with monitor speakers pointing back at you, as that will have a significant effect on what product you choose.

The main reason that strings are quite difficult to amplify compared with, say, voices, is that their sound projection isn’t directional. When you play a violin, the sound comes from all over the instrument – the strings themselves, the vibrating wood, the f-holes, the fingerboard. The obvious solution is to capture the sound using a microphone a short distance away – which works well for recording. However, when it comes to amplification, such positioning runs into the issue of feedback, because the microphone has to be turned up quite a lot to compensate for the distance and non-directionality, so it also picks up what’s coming out of the speakers, especially monitor speakers.

A microphone will also pick up ambient noise and other instruments, so if you’re playing anywhere near a drum kit, for instance, your sound will be swamped. This is where you need ‘isolation’, in other words something that selectively amplifies your instrument, and only your instrument. Pickups are a neat and effective solution to both problems, being both feedback-resistant and offering near-perfect isolation. 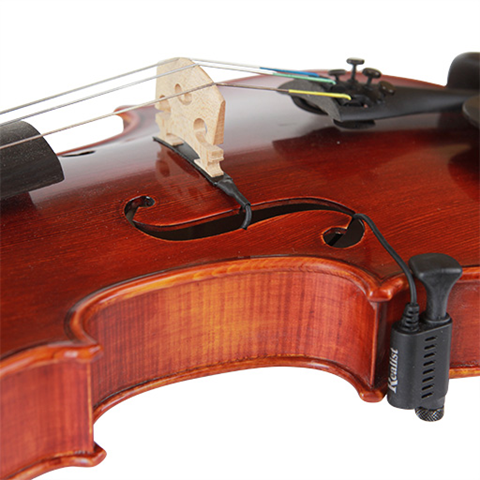 The Realist pick-up, available for all bowed strings including double bass, is a highly rated and compact option

Most pickups for bowed stringed instruments take the form of a piezoelectric transducer, which works by converting vibration into a small electrical signal which is then amplified. It’s a simple and compact technology, and pickups are small enough to tuck into the wings of the bridge or even thin enough to shim under its foot without altering the feel of the instrument. A number of models now come pre-installed into blank bridges, which should be fitted to your instrument by a luthier.

The problem with pickups is that they always sound like pickups. Their use is widespread owing to their practicality and, with a dedicated preamplifier to ‘shape’ the signal and an experienced sound engineer, they can sound OK, good even – but essentially they all lack a dimension of the full and resonant sound of your bowed stringed instrument. They do not, despite what their marketing copy insists, sound ‘natural’. You may have to make that sacrifice, however, if you’re playing with a loud band, and indeed many musicians have embraced the unique sound, or gone a step further to solid-body electric violins.

Pickups tend to be robust and affordable and come in all kinds of configurations. Many require a permanent or semi-permanent installation, which may not be right for you if amplification is only an occasional element of an otherwise classical career. However, there are also options that are quick easy to take on and off, for which there is only a small sacrifice in sound quality, if at all. You can compare all the main models at thepickuptest.com (see box below) and make up your own mind.

Specialist instrument microphones will always sound more natural than pickups. Those by Danish rivals DPA and Remic and US manufacturer Countryman offer high-end sound for both studio and live applications. They aim to mitigate the feedback/isolation problems in live settings by being very small and therefore able to be attached to the instrument without getting in the way of your bowing. Compared with a microphone on a stand, therefore, they will pick up less ambient sound. 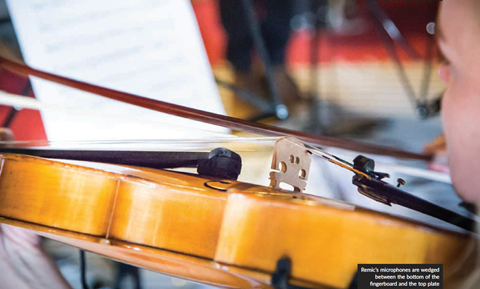 Remic, which specialises in classical instruments, encases its microphones in a dense foam which is then wedged between the bottom of the fingerboard and the top plate of the instrument. It offers separate Studio/Live and Live models, with the latter being tuned to suppress nearby sounds heavily, with a certain sacrifice to the depth and breadth of your tone. 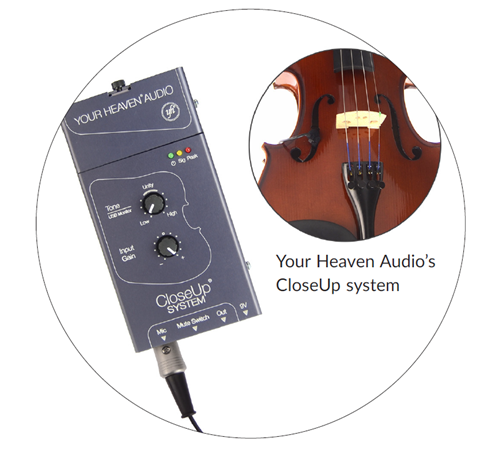 Until very recently, microphones and pickups or a combination of the two were the only options. In the past couple of years, however, a number of new digital hybrid technologies have emerged that bring high-tech solutions to some of the problems described above. The CloseUp system by Your Heaven Audio combines a microphone placed inside the instrument (through the f-hole) and a small digital processing module. The placement of the microphone offers excellent isolation but on its own would sound boomy and boxy – but this is where the digital element comes in, with its one-time set-up process. The processing module ‘learns’ the difference between the natural sound of your instrument and what the microphone picks up from inside it, and digitally enhances the signal to sound more like your instrument’s actual tone.

Working on similar principles is the ToneDexter by Audio Sprockets, a standalone preamp pedal designed to be used with any piezoelectric pickup. It learns and stores a ‘WaveMap’, which is created by first recording your instrument with a studio microphone. The WaveMap is then used to process the sound of the pickup to make it sound like your microphone.

Approaching from different angles, these systems offer excellent ambient sound reduction (isolation) and feedback resistance, coupled with impressive naturalistic sound. There are demos of both on thepickuptest.com which are well worth checking out.

Microphones sound more natural but come with an increased risk of feedback and picking up louder instruments nearby. They tend to be more expensive to purchase but require no installation costs, unlike many of the higher-end pickup options. Industry-standard models like the DPA 4099 have been tried and tested for years, and are very familiar to sound engineers.

Pickups are affordable, flexible and reliable but will never sound natural. If you go down the pickup route, your particular choice should be guided by the other elements of the package and how it suits you – where it clips on, or if it requires professional installation, and whether it comes with a volume button assembly or belt-clip module.

The hybrid options certainly look very promising but depending on where you live in the world, they may be difficult to get your hands on to audition. 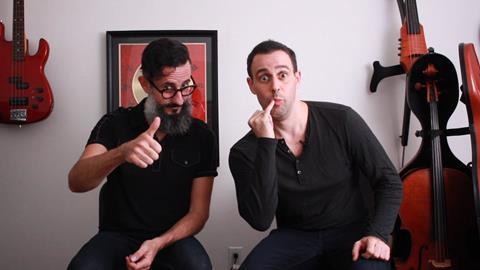 Run from Los Angeles by cellist Jacob Szekely and violinist Luis Mascaro, The Pickup Test was set up to make it easy for violinists, violists and cellists to hear the different amplification options on the market objectively before deciding what to buy. For a one-off $10 sign-up fee, the media player on www.thepickuptest.com offers side-by-side comparisons of more than 50 pickups and 15 instrument microphones as recorded in exactly the same conditions. With its simple interface you can compare the sound of an instrument through the pickup or microphone directly with its sound through an acoustically isolated amplifier and a room microphone, flicking between makes and models instantly. The site also provides a useful reference list of the main available products, including recommended retail prices and key specifications, such as whether the equipment requires permanent installation.

The website also includes video reviews and tutorials on all elements of amplified strings, with guest contributors including engineer Scott Fraser, who has been the Kronos Quartet’s sound designer since 1992. The video tutorials in the E-Bootcamp section are a great place to start for understanding the different available technologies. One piece of advice from Szekely:

‘If your only goal is a natural, acoustic sound on bowed strings, in a generally quiet acoustic environment with minimal or no monitoring, should you forget pickups entirely in favour of microphones? The answer to that question is probably yes.’