Was Sherlock Holmes actually meant to be any good at playing the violin?

'Melancholy wailings', 'exasperating solos', but 'a remarkable gift for improvisation' – we revisit Maggie Williams's article on our favourite fictional violinist 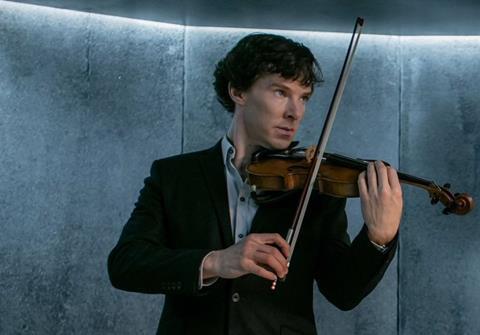 Benedict Cumberbatch as Holmes in the BBC series Sherlock

Sherlock Holmes, Arthur Conan Doyle’s most famous literary character, first appeared in 1887 and went on to feature in four full-length novels and 56 short stories. His day job was as a ‘consulting detective’, for which he used his powers of deduction to outwit criminal masterminds, but he is also one of fiction’s most famous music lovers and violinists.

While Holmes’s association with the violin is well known through radio, television and film representations of his character, substantial allusions to his musical passions are relatively few and far between in Conan Doyle’s original books. References to his playing are rarer still, but they are sufficient to give a picture of a cultured, if unusual, player who – of course – possessed a Stradivari.

The majority of Conan Doyle’s Holmes narratives are voiced by the detective’s regular companion, Dr John Watson. In The Adventure of the Mazarin Stone (1921), Watson describes a visit to Holmes’s London residence, 221B Baker Street, and his delight at being reacquainted with ‘the scientific charts upon the wall, the acid-charred bench of chemicals, the violin-case leaning in the corner, the coal scuttle which contained of old the pipes and tobacco’.

As for the contents of the violin case, The Adventure of the Cardboard Box (1892) finds the long-suffering Watson taking lunch with Holmes, who would ‘talk of nothing but violins, narrating with great exultation how he had purchased his own Stradivarius’, which he acquired from a broker in Tottenham Court Road for 55 shillings. Holmes’s estimate in the same story is that the violin is worth ‘at least 500 guineas’.

Holmes evidently got a bit of a bargain – and the detective is no slouch when it comes to stringed instrument history. The Field Bazaar (1896) finds him studying ‘a very interesting article upon the trees of Cremona and the exact reasons for their pre-eminence in the manufacture of violins’. 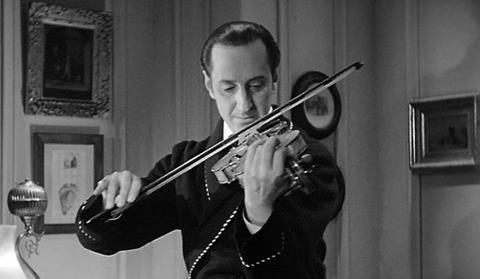 Paganini heads Holmes’s list of performers on his own instrument. Watson describes in The Adventure of the Cardboard Box how ‘we sat for an hour over a bottle of claret while he told me anecdote after anecdote of that extraordinary man’.

In A Study in Scarlet (1887), Holmes can be found attending a concert by the 19th-century virtuoso Wilhelmina Norman-Neruda, whose ‘attack and bowing are splendid’, and a performance by Sarasate draws both Holmes and Watson to St James’s Hall in The Red-Headed League (1891). Sarasate was obviously to Holmes’s taste as, by Watson’s account, he sat in the concert, ‘wrapped in the most perfect happiness, gently waving his long, thin fingers in time to the music’.

In the only story where the violin plays a tangible part in the plot, The Adventure of the Mazarin Stone, Holmes fools his foes by telling them he is about to play the Barcarolle from Offenbach’s Tales of Hoffmann in an adjoining room. In fact he puts on a record of the same piece, but the villains of the story fail to notice that it is a recording rather than a live performance.

'When left to himself ... he would seldom produce any music or attempt any recognised air'

Was Holmes any good as a player? Here opinion seems to be divided. Although his listening tastes incorporate mainstream classical music, there are few references to Holmes actually playing such repertoire on his own instrument – and he is never described as playing from a score. Nor is there any evidence that he took part in chamber music, or even played with an accompanist. In A Study in Scarlet, Watson paints the most complete picture of Holmes’s abilities: ‘His powers upon the violin ... were very remarkable but as eccentric as all his other accomplishments.

‘That he could play pieces, and difficult pieces, I knew well, because at my request he has played me some of Mendelssohn's Lieder, and other favourites. When left to himself, however, he would seldom produce any music or attempt any recognised air. Leaning back in his arm-chair of an evening, he would close his eyes and scrape carelessly at the fiddle which was thrown across his knee.

‘Sometimes the chords were sonorous and melancholy. Occasionally they were fantastic and cheerful. Clearly they reflected the thoughts which possessed him, but whether the music aided those thoughts, or whether the playing was simply the result of a whim or fancy was more than I could determine.

‘I might have rebelled against these exasperating solos had it not been that he usually terminated them by playing in quick succession a whole series of my favourite airs as a slight compensation for the trial upon my patience.' 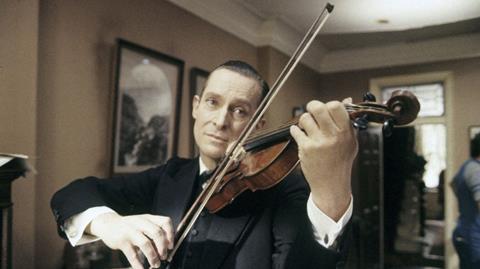 Watson describes Holmes in The Red-Headed League as ‘an enthusiastic musician, being himself not only a very capable performer, but a composer of no ordinary merit’. However, in his introduction to the Penguin Classics edition of A Study in Scarlet, the author and critic Iain Sinclair is less complimentary. He finds Holmes ‘sawing away on the violin like something out of the Incredible String Band... a boho poser, a Huysmans aesthete’.

Sinclair’s assessment of Holmes’s playing may well be based around the description in A Study in Scarlet that Holmes would ‘scrape carelessly at the fiddle which was thrown across his knee’. In our modern parlance, referring to a Stradivari as a ‘fiddle’ would be on a par with describing Holmes as a policeman – slightly inaccurate and certainly an understatement. And the idea of him ‘scraping carelessly’ sounds at odds with the descriptions of Holmes’s musical prowess put forward in other novels.

However, the dates and sequence in which the stories were written have a role to play. A Study in Scarlet is the first story to feature Holmes. It describes several aspects of the detective’s skills and character that are contradicted in later novels, and Conan Doyle may have decided to elevate his creation’s musical skills as time went on.

Only small clues to Holmes’s musicianship can be found in Conan Doyle’s own life. The author claimed that his primary inspiration for Sherlock Holmes was Dr Joseph Bell, an eminent physician and amateur sleuth for whom Conan Doyle had worked in Edinburgh. Bell seems not to have had any musical inclinations of his own and although Conan Doyle’s detail of concerts and players of the time is accurate, most of the references could easily have been pulled together from concert flyers of the period.

Whatever scant evidence the original texts offer, Holmes is as closely associated with the violin as he is with his deerstalker hat and unusual curved pipe. Unlike those last two objects, at least Holmes the violinist is a genuine Conan Doyle creation – neither the headwear nor the curious smoking apparel are mentioned in any of the original works.