Why record the music of Goya’s Madrid?

On the heels of ‘Heritage’, the Cuarteto Quiroga’s latest CD release, Cibrán Sierra, violinist with the ensemble, explains why they decided to delve into the music of 18th century Madrid 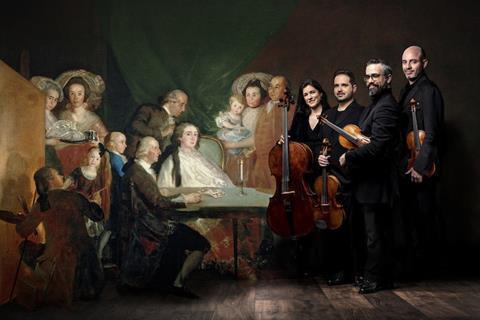 Most music lovers around the world identify the birth of string quartet with the name of the great Austrian composer Joseph Haydn. They think of it as a Central European phenomenon and associate its origins with Vienna, mainly, but also with Mannheim, northern Italy, and the Bohemian lands. London, Paris, Amsterdam, Leipzig, the court of Prussia and even the nordic Stockholm enter the picture when one studies the rapid expansion of this genre, but one European capital is usually left out of the discussion: Madrid.

Heritage, our latest CD recording, attempts to illustrate how Madrid, in the last third of the eighteenth century, became one of the most active capitals of the European string quartet scene. This was a time when the arts flourished around the Royal Court; when the now world-renowned Francisco de Goya produced a series of masterworks as chamber painter for the Royal Household. It was also a busy time for brilliant composers such as Boccherini, Brunetti, Canales, Almeida amongst many others, whose large catalogue of chamber music (especially string quartets) was performed in the very same chambers where Goya was producing his work.

Unfortunately, until nowadays, these collections of string quartets have remained little-known with no musical justification. Regarded with a certain disdain by critics, musicologists, performers, programmers and regular music lovers, they are unfavourably compared with the so-called Viennese canon represented by Haydn and Mozart. But is this the most sensible perspective?

As with most string quartets, our career has orbited around the meticulous study of music written by the Austro-German masters and their heirs. Now, after thoroughly exploring the output of Madrid’s eighteenth century composers, we have arrived at a different concept of what string quartet writing can be. While Haydn’s model is based on motivic variation and development, the Italo-Iberian paradigm focuses more on the use of melodic allure, repetition and gradation, abrupt dynamic contrasts and a more concertante and arioso instrumental writing style as rhetoric devices to create music which is more theatrical than narrative.

In a way, we could say that the Viennese canon - considered by generations of European composers, players and listeners to embody the essential values of the Enlightenment - could be characterized as Apollonian, while the writing of Boccherini, Brunetti and some of their Iberian followers represents the Dionysian counterpoint of the enlightened musical rhetoric.

We hope, through our historically informed approach to performance practice, to do justice to this music which deserves to be rediscovered, revisited and normalized in concert halls worldwide. But our aim is more general than that: ever since its foundation 2003, our quartet has always paid attention to its origins (our very name pays tribute to one of our most extraordinary musicians: the Galician-born violinist Manuel Quiroga). Now, for our sixth commercial recording, we wanted to honour the musical memory of the city that is both our home and the kitchen where we cook our musical projects.

Read our review of ‘Heritage’ here.