Baroque violin: How to get the most out of a bow stroke

Bow control and son filé with Simon Standage, professor of Baroque violin at the Royal Academy of Music and leader of the Salomon Quartet 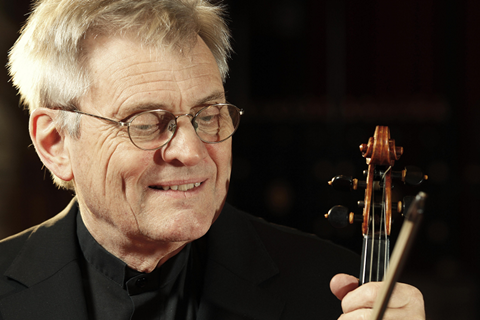 I see a lot of young players whose bowing is quite undisciplined. This is partly because of the nature of Baroque music: when playing post 1800s compositions on the modern violin, sostenuto is inbuilt; it’s a basic element of technique. But the language of earlier music is more articulated and this generally applied sostenuto isn’t appropriate any more, so some players think it is OK to play flimsily. From Baroque era reports of playing and teaching, however, it is clear that this was not the case.

When my students start playing ‘fluffily’, I remind them that if you wanted to be in Corelli’s band you had to be able to play two strings at once for ten seconds with a full, steady sound, in one bow – and they had short bows at that time. This tradition was continued by Corelli’s pupil Giovanni Battista Somis, whose ‘single bow stroke lasted so long that the memory of it takes one’s breath away’, according to French violist Hubert Le Blanc – and then by his pupil Pugnani, and by Pugnani’s pupil Viotti.

This in turn inspired Pierre Baillot (1834), who considered practising ‘filer des sons’ to be as essential for the development of bow control as scales are for the training of the left hand – a thought echoed by Ivan Galamian in his 1962 Principles of Violin Playing and Teaching.

In early music in particular, every note should be shaped – even the shortest. Once you have acquired some control of your bow speed, there will be a wider range of sound shapes you can make.

The principles below apply whether you are using a modern violin and bow, an old set-up or even a heavy Baroque bow on a modern fiddle, although using modern equipment requires more adjustment. The advantage of using period tools is that you don’t have to make compromises – you can just play for all you’re worth.

Learning to use a slower bow stroke will help you to create musical emphasis, and it will allow you to produce a denser, more intense sound.

EXAMPLE 1 In the Passaggio rotto from Matteis’s Ayres for the Violin, the long notes have no harmonic implications, so each can be played as a simple swell within one bow, shaped as in Galamian’s fifth example.

EXAMPLE 2 In Veracini’s Sonate accademiche, each note is marked with a diminuendo, until the D of the second bar where we are instructed to play a swell. Again, there are no harmonic implications and Galamian’s fifth example is the appropriate shape to use here.

EXAMPLE 3 At the opening of Handel’s D major Violin Sonata, there is a dissonance between the start of the violin E and the D of the bass-line, and also between the end of the E and F sharp in the bass. If you followed the same up–down shape as before, you’d miss the clash at both ends of the note, so this time you have to play an inside-out version. Diminuendo to the middle of the note and grow towards the end – as in the last of Galamian’s illustrations.

EXAMPLE 4 In the slow movement of the Bach A minor Violin Concerto, the long B flat starts off with a diminished 7th and ends up suspended over a chord of A major, and your sound should be strong: these are points of great stress. Take two bows. Some people try to do it in one, but then it’s difficult to hear the note, so what’s the point? This is an upside-down version of Galamian’s fourth example.

Try to play pieces that put this sort of bowing into practice, rather than repertoire that is challenging in other respects. Vivaldi’s Four Seasons concertos are very useful: the outside movements for shaping slurs of fast notes; the slow movements for shaping individual notes. You can also practise the different shapes required by playing the following examples. Focus on maintaining a good quality of sound, using your instincts to manage and balance bow speed, bow pressure and point of contact.

In a letter written in 1760, Tartini advised his pupil Maddalena Lombardini to practise a swell on an open string using up bows and down bows for ‘at least an hour every day, though at different times, a little in the morning, and a little in the evening … beginning with the most minute softness increasing tone to its loudest degree, and diminishing it to the same point of softness with which you began, and all this in the same stroke of the bow’.

The principle is good, but I can’t imagine any student having an hour a day spare to spend on drawing slow bows! I would spend just a few minutes on the bowing exercises at the beginning of your practice, and try to bear the ideas in mind all the time while practising your repertoire.

I am not very systematic when it comes to teaching son filé bowing. Instead I act as a policeman: often students move the bow too quickly and I have to jump in and hold them back. Even when they use the technique correctly, it’s worth getting them to do it again for reinforcement. Sometimes students overdo the idea to begin with, but I’d much rather see that than flimsy playing. The whole point of this exercise is to push to the limit what you can get out of one bow stroke.

The most common defect in pupils’ bowing technique, in my experience, is the overuse of fast and unshaped strokes. Using a slower stroke for rhythmic emphasis in a passage of fast notes, or to enjoy a juicy harmony, is most effective, and the ability to hold back the stroke, particularly at the beginning, makes better distribution possible. 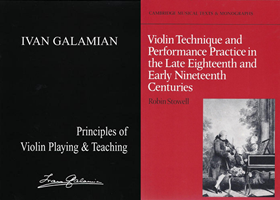 This book will give you the remedies to all your violinistic ailments. Pages 103—4 describe son filé and how to practise it, emphasising the need for sensitivity in the right-hand fingers, above all the index finger. It recommends combining the above-mentioned exercise with many slurred notes and string changes, to counter stiffness in the wrist and hand while developing sustaining power.

This book has translations of writings by Spohr, Baillot and many other non-English pedagogues writing long before Galamian. It deals withissues such as tone production and the relationship between bow pressure, speed and point of contact problem by problem, and it is certainly worth looking at.