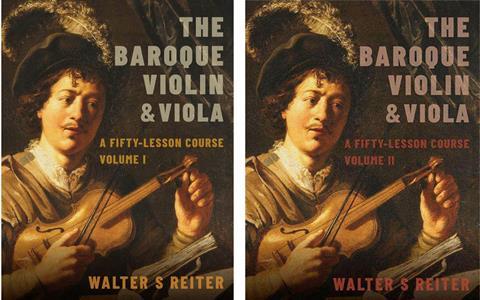 Back in the 1970s, if a violinist wanted to learn about the Baroque violin and how it was played, they could, in addition to reading the old treatises, consult David Boyden’s 1965 History of Violin Playing from its Origins to 1761. In the preface Boyden claimed that as a history of violin playing ‘it is, as far as I know, the first book of its kind in any language’. For those first players, this extensively researched book was indispensable.

Judy Tarling’s 2000 Baroque String Playing for Ingenious Learners was addressed directly to players from the point of view of an experienced violinist. Her text is liberally supplemented with extracts from old writings but also offers her personal views and a great deal of practical advice on a wide field of subjects.

Walter Reiter’s new two-volume work The Baroque Violin and Viola: A Fifty-Lesson Course is presented as an offer from a teacher of long experience to share his knowledge. As the implied teacher–pupil relationship suggests, this is a very personal approach, as evidenced by an introductory list of inspirational quotes and the periodic insertion of highlighted paragraphs of comment, advice and aphorisms, and numerous specially devised exercises. The author’s intention in these written lessons is to prepare and inform the student in advance so that the limited time of a face-to-face lesson can be put to more productive use.

Volume One is in two parts, the first of which deals with ‘The Basics’ – choosing an instrument and bow and how to handle them both, including the technique of ‘chinless’ shifting, but also some fundamental musical topics. The second part addresses the nature of interpretation and discusses ornamentation and rhetoric. Volume Two takes us on a journey through the solo violin music of the Baroque era, with generous background information and detailed examination of repertoire from Fontana to Bach. Throughout the lessons the cultural references are broad, including sculpture, painting and philosophy, reflecting the author’s conviction that our music making is enhanced and inspired by an awareness of the whole contemporary cultural scene. The topics of study likewise range wide. Lesson Six offers relaxation exercises to help with ‘chinless’ playing and in Lesson Five, pursuing the theme of ‘searching for our vocal roots’, there are four exercises in imitation of the human voice, which include trying to reproduce Italian vowel and consonant sounds on an open string.

In Volume Two, inserted into the series of lessons, there are three ‘interludes’ where the violin is partly set aside. The Florentine interlude tells the story of Count Bardi’s Camerata, whose attempts to rediscover the music of ancient Greece led to the creation of a new musical language, from which the first violin sonatas sprang. In the Roman interlude, Exercise 98 proposes that, by imitating the gesture, posture and facial expression of Bernini’s sculpture The Ecstasy of Saint Teresa and totally identifying with its emotional essence, the student can transfer this heightened state to their performance of the sonatas studied in the previous chapters. The less fanciful, but wholly relevant, Versailles interlude paints a colourful picture of life and manners at the court of Louis XIV as an introduction to the highly idiosyncratic world of French Baroque music.

Presentation of the nuts-and-bolts details of performance is clear and level-headed, although the beat-by-beat analysis of the chosen repertoire can be heavy-going. The instruction, at the end of the last lesson, to ‘stress the start of (both) slurs, releasing the pressure on the bow afterwards to allow the notes to flow freely with a natural diminuendo’ should by that stage be redundant. Also, there are more misspellings and wrong dates than can escape mention. David Boyden’s book was accompanied by an LP, Judy Tarling’s by a CD. Walter Reiter’s books have a companion website.