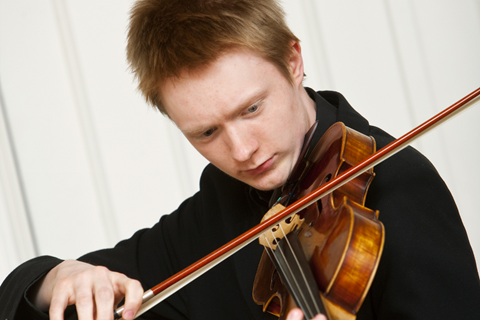 Walton’s Concerto for Viola is today considered a standard work for the violist as it shows many sides of the instrument, both technically and musically. It has everything from slow alluring melodies to fast and virtuosic passages. In addition to the demanding solo part, the concerto also has a broad symphonic character. It’s written for a big orchestra where all the parts are very demanding.

The edition that most violists have today is from the publisher Oxford University Press. The viola and piano reduction was published by violist Frederick Riddle. In my opinion it is a good edition because Riddle worked with Walton himself and made the first recording of the concerto with the composer conducting.

In the Oxford edition, Riddle made a lot of new markings to the solo viola part. Dynamics, slurs, tempo changes and fingerings are clearly marked in the viola part. In addition to these markings one can also see soft markings in the solo part. For example, the tempo in the beginning. There are two sets of tempos; the one with a strong text is Riddle’s tempo and Walton’s is soft.

What naturally happens is that one starts to focus on Riddle’s markings and forgets to look at Walton’s. So my first advice is to make sure you look at Walton’s markings in the viola part – you will find many interesting new things and a greater understanding of the work.

1. Balance between the soloist and orchestra
The big challenge in Walton, as in most concertos, is the balance between soloist and orchestra. The violist is notoriously challenged with regard to carrying the sound out to the concert hall with an orchestra behind them. Walton orchestrates with density, therefore the balance becomes difficult. What is important in Walton (and all other viola concertos) is to simply change all the dynamics one-two steps up. Dynamics are not only a description of volume but should also be considered a character description.

2 Finding the tempo/pulse
Something that should not be forgotten is the pulse. One can easily fall into practising the concerto with lots of rubato, without knowing what the other orchestral voices do in the accompaniment.

Something I’ve tried to do every time I practise a concerto is to actually conduct the piece as well. By doing this you get an awareness of how the beats are conducted, particularly when time signatures change (which happens quite a few times in Walton!), so you achieve a greater understanding of how the pulse is taken forward. This way, you get a reality check on whether the rhythms are played accurately. To me, this is an alternative way of practising instead of using the metronome.

3. Glissando to help shape the phrase
For the left hand, it’s good to play glissando in the different phrases: glissandi are important in Walton as it is part of his style. You do not have to hide glissando (unless glissando doesn’t fit in the phrase). When you hear professional singers, they use glissando to reach the higher notes which is totally natural for the human voice. What we should do as instrumentalists is imitate the human voice, so the easiest way to figure out if a glissando fits or not, is to sing the phrase.

4. The A-string
When someone is asked to explain what makes the viola so great, one usually says that the C-string is what gives it this dark and powerful sound. However, one thing that people don’t talk much about is the A-string, which offers so many sound colours on the viola.

Yet producing a great A-string sound is rarely talked about among violists. The bow hand needs much less weight on the A-string compared with the C-string. Then the A-string will sing with a warm and expressive sound.

Eivind Holtsmark Ringstad perfoms the Walton concerto with the BBC National Orchestra of Wales this Friday 28 September at BBC Hoddinott Hall, Cardiff (2pm). The concert will be broadcast live on the Radio 3 Afternoon Concert programme.

He also performs at Snape Maltings on Saturday 27 and Sunday 28 October as part of the BBC Radio 3 Big Chamber Weekend.