Though the standard of double bass playing has risen exponentially during the past 50 years, conductors’ attitudes towards the instrument have barely changed 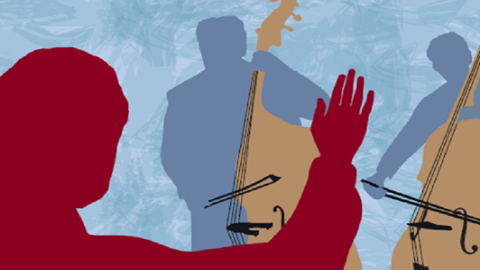 During my 40 years of soloing with orchestras around the world, I have never ceased to be amazed by the lack of knowledge and respect demonstrated by some conductors towards the double bass, and by some of their demands of the double bass section. On many occasions I have felt obliged to put right a conductor’s incorrect instruction, but in my experience only two conductors, Gerard Schwarz and Otto Werner-Mueller, have ever asked me questions about double bass technique and how it applies to orchestral playing. Orchestral colleagues have said they too have never been consulted about matters concerning our instrument, so it seems that although the standard of double bass playing has risen exponentially during the past 50 years, conductors’ attitudes towards the instrument have barely changed.

Many conductors request that their double bass section players use large instruments because they incorrectly assume that these will produce a bigger, warmer and more projecting sound. As I have found in my own performances and listening to those of other players, this assumption does not stand up to scrutiny. For example, a student of mine insists on playing a large, 7/8-size instrument, which she believes has a loud, projecting voice. In a small room it does indeed soar, but in a capacious hall, when compared to a cheap, 3/4-size plywood bass, her instrument sounds half as loud. In spite of this she continues to use her instrument: like many conductors and double bassists, she has a mindset that cannot be changed.

Before I retired in 2001, I gave a great concerto performance with the Osaka Philharmonic Orchestra. As an encore I played a duet with the principal double bassist, Kazuo Okuda, who played a magnificent full-size Montagnana, while I played a 1995 James Ham. Standing next to this monster double bass I could barely hear myself and felt certain that Okuda was stealing the show. But friends seated in various places in the concert hall told me afterwards that they could barely hear the Montagnana, whereas all my notes were crystal clear.

From my own experiments I am convinced that small double basses sound louder and carry further than large ones, without any lessening of the depth and warmth of sonic production. Because conductors face the stage, they often misjudge the sonic projection of the double bass as heard by the audience, and therefore favour large instruments. There have been exceptions, like Leopold Stokowski who seemed to have ears in the back of his head. As an accomplished organist he may have been more aware of the acoustics of the entire hall because he did not stipulate that the double bass section only use large instruments. He also aided the sonic projection of the basses by placing them on risers at the back of the orchestra where they faced the audience. Stokowski was one of the few conductors who was never afraid to say, ‘More bass!’

There are countless times in my career when I have heard conductors ask for ‘more bow’, indicating that they want to see the double bassists use all the hair from frog to tip. I believe that this misguided instruction is the result of their equating double bass bowing technique with that of the violin, viola or cello. Conductors should know that the double bassist’s bow moves more slowly than those of the other stringed instruments, particularly on the lower two strings, yet for more than a century conductors have been shouting to the bass section: ‘More bow!’, resulting in an unfocused rope-like, growly sound that has been accepted as tradition.

As orchestral double bassists will attest, bowing as fast as a cellist is challenging in the extreme, and only by using the stickiest rosin can the player keep the bow connected to the string. Drawing the bow at such speeds also requires the player to move the bow closer to the fingerboard, resulting in less projection, less clarity and a less focused pitch.

When I served on the faculty of the New England Conservatory of Music (NEC) in Boston in the late 1960s, I instructed double bass students to produce a much clearer, more focused and cleaner sound in the orchestra by breaking with tradition and using a very small amount of bow. The results were a huge improvement and gave better support to the overall orchestral sound, and because the pitch was so clear, it improved the intonation of the entire ensemble as well. This approach did not find favour with everyone: the Hungarian– French conductor Charles Bruck, who served on the NEC faculty as the conductor of its orchestra, made it clear that he was not happy to see such greatly reduced movement.

Many players in the double bass section will be familiar with the sight of the conductor’s palm – a gesture instructing the section to play more quietly. In my opinion, conductors who do this a lot are focusing on the visual and ignoring the sonic capabilities of the basses in their section. My contention is that these conductors are frustrated by their inability to effect an improved sonic output from the double bass section, and rather than learn more about the double bass and double bass technique, they opt to minimise the projection of sound instead.

A colleague in Spain related to me an occasion during a rehearsal of a new work when the conductor kept showing the double bass section the palm of his hand, no matter how softly they played. So the musicians decided to fake their bow movements, making no sound whatsoever – and this ridiculous manoeuvre elicited a compliment both from the conductor and the composer!

Another example of conductors focusing on the visual has to do with orchestral pizzicato. Players will often be encouraged to be physically demonstrative with their pizzicato playing, so with great flourish the string is pulled outward from over the middle of the fingerboard, but at this location the sonic projection and pitch definition are greatly reduced. To produce a discernible, prominent pizzicato I prefer to play it at the bottom end of the fingerboard: plucking the string closer to the bridge produces a clear, projecting sound, as jazz players know.

Like the timpani, the double bass is an exceedingly resonant instrument which, for the purposes of clarity, requires an efficient dampening technique. This is particularly important when playing spiccato, which as any double bassist will know is anathema for the creation of distinct, well-defined sound. Even with solo playing, I limit the amount of spiccato bowing, but when spiccato playing is required I keep the bow close to the string, which allows for the dampening so that one pitch doesn’t resonate into another, creating a lack of clarity and, even worse, poor intonation. When I have heard conductors, especially in Mozart, ask the double bass section to play spiccato, I knew that the resulting sound would be muddy, overly resonant and anything but elegant.

In Los Angeles in 1959 I was the only double bassist in the Young Musician’s Foundation chamber orchestra. Its conductor was one of my idols, Henry Lewis, who was also a brilliant double bassist. On one occasion we were playing a Mozart chamber work, and Lewis asked me to play spiccato, but then kept showing me the palm of his hand, ostensibly to urge me to play softer and lighter. I became so irritated that, like those musicians in Spain, I started faking my bow movements without actually touching the strings. When I did so, sure enough Maestro Lewis gave me the thumbs up!

On many occasions after I have played a solo recital, audience members have told me: ‘I had no idea the double bass could sound like that!’ Yet it is a sound that should be as familiar to audiences as that of the violin or cello, and the special voice of the double bass should be evident even when the double bass section is simply supplying the harmonic and rhythmic foundation. Often a conductor’s sonic perception of the double bass does not reflect the true character of its expressive solo voice, and without greater understanding of the technique and the instrument itself I cannot help wondering if the double bass will ever achieve the recognition it deserves from the classical music world.

This article was first published in The Strad's July 2014 issue.