Should violin shops and luthiers be more welcoming to young learners? 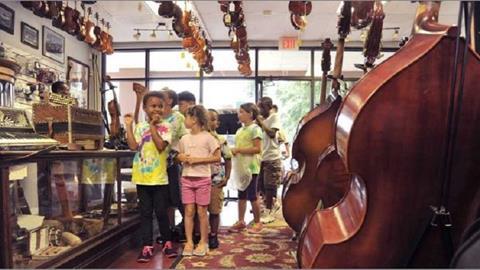 The other day, waiting for my bow to be rehaired, I fell to musing on the curious symbiotic relationship between luthiers and the teachers – and by extension pupils and parents – who depend on them. Between expert performer and luthier there is a deep relationship: one of need, trust and mutual benefit, often spanning years. Between inexpert performer and luthier the relationship is less established and, one could argue, more in need of nurturing.

In nature, symbiotic relationships range from the harmful (parasitic) to the harmonious (mutualistic). Since neither party involved here – barring some form of criminal behaviour – actively harms the other, we can discount the former. That leaves the latter, where both parties benefit. Take the oft-cited example of the oxpecker bird, which removes ticks from the rhino, feeding itself in the process. Removing ticks is not a particularly romantic representation of the skill and care that go into mending an instrument, but the analogy is reasonably straightforward. In this case, the luthier has skills that the teacher needs to ensure instruments and bows are in top condition. The teacher, and their pupils, help the luthier in two ways. They pay money, and they spread the word that the work is good, ensuring the continuing survival of the luthier’s business.

Violin shops and luthiers’ workshops are places of magic and wonder. They mix the allure of the beautiful with the promise of miraculous transformation, the atmosphere of calm, focused work with exotic objects and smells. To the uninitiated they are exciting, but also potentially off-putting, even intimidating. In the less exalted setting of a music shop, the transaction is simple. I am a customer, there to buy a service. I get what I need or not, and I move on. Push open the door of the specialist shop or workshop, however, and breathe in the heady smell of varnish, and you are already in a different place entirely.

First you are unsure whether you have the necessary entry requirements. Do young players with humble factorymade instruments deserve to enter one of these highly specialised, quasi-magical establishments, and ask for help? They may be better off in a more workaday, less exclusive establishment, but they want the real deal. Will they be greeted kindly, or with a fixed smile, signalling that they have done something foolish? Will they come away feeling they have fallen victim to a small but nevertheless unpleasant snobbery?

Of course, highly skilled professionals don’t want to spend their time working on shoddy goods, and not dealing with small-sized instruments might cut out many offending examples. Capture players young, however, and potentially you have them for life. It’s a dilemma. Take the young man who was rehairing my bow, a newcomer to London. Either unaware of the prejudice existing in the market, or genuinely immune to it, he stocked everything from cheap starter outfits to far more expensive instruments, demonstrating an inclusive attitude that, sadly, is often absent. Or the luthier I met working in London’s East End, who actively sought out work mending the simple instruments available to the children in schools there as part of his practice, seeing it simply as being part of the community in which he lived.

Buying an instrument can also bring pitfalls for our unwary pupils. Once, long ago at a dealer’s, I had a very uncomfortable experience. While my pupil was in the other room trying a couple of violins, the dealer took me aside and asked me how I would like my commission. Staggered, I recoiled. I hadn’t expected anything, and was affronted that he should offer me money behind my pupil’s back in order to secure a sale. Reflecting afterwards, asking around, and with the benefit of considerable further experience, I found that this was in fact pretty standard practice. One dealer told me that without teachers bringing in their pupils in order to collect their percentage, his business would go under. Oxpecker needs rhino after all, and not just as a source of ticks.

If that is the case, what can we as teachers ask for our young learners? Respect and an honest service, naturally. But yes, please, just that little bit of magic that links them to the fine, centuries-old tradition that we all belong to. The whiff of varnish is a powerful invitation to dream.