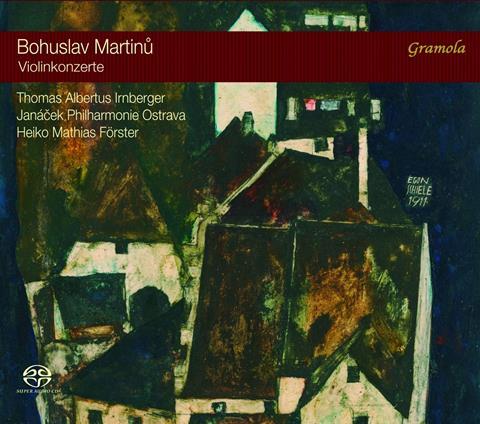 It is a rare joy to encounter Martinů’s different but complementary violin concertos on a single CD and an even rarer one to hear them played with the combination of grit and tenderness, passion and elusiveness that we get here.

Viennese violinist and prolific Gramola recording artist Thomas Albertus Irnberger gives us a properly agitato sound in the neo-Classical First Concerto’s opening movement and plenty of colours thereafter, finding mahogany depth and translucent sweetness in the slow movement and revelling in the impish fun of the finale.

The Second Concerto, written a decade later in 1943 in New York, injects Romantic lyricism into the still-brittle proceedings but Martinů’s joyous eccentricities aren’t numbed. Irnberger handles those chains of perfect cadences with a special sort of determined whimsy, again providing a wide range of colours from an instrument that sounds very fine indeed in the recording (details are not listed).

The curious, magical upward pining passages of the second movement are marginally betted handled by orchestra than soloist – the Janáček Philharmonic Ostrava plays with swagger and spice throughout – and in the finale Irnberger has all the gameplay but perhaps not quite the last ounce of power of some of his competitors.

Still, notwithstanding Josef Suk’s benchmark recording of the two concertos, this is certainly recommendable.