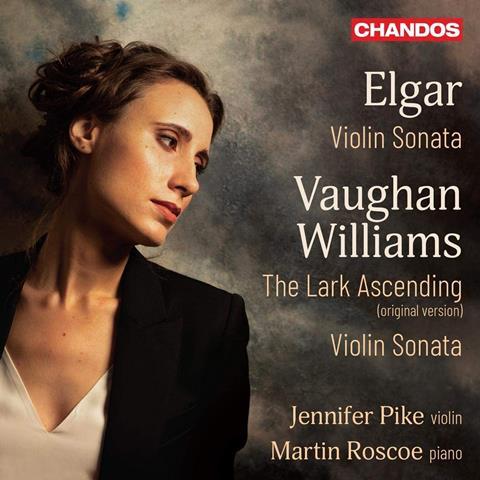 Description: Rare and well-known repertoire with a twist combine in an irresistible release

This is an enticing CD that lives up to its promise. Vaughan Williams’s Violin Sonata is a rarity, and The Lark Ascending is best known in its orchestral version. The standard repertoire here is Elgar’s Violin Sonata, which Pike and Roscoe perform with vigour and entrancing sensitivity. They launch into the first movement with red-blooded energy, following which Pike’s tender, small voice is the more affecting. In the central Romance she moves from light caprice to deep reverie; the grand rhetoric and limpid subtleties of the finale complete a tremendous performance.

Pike and Roscoe give a persuasive demonstration of why Vaughan Williams’s A minor Sonata, a stark and beautiful work, deserves more attention. They gently explore the strangely unsettling landscape of the first movement, with Pike bringing fraught character to its double-stopped interjections before the bleak conclusion. She pushes urgently through the quixotic 4/4 Scherzo, whose nervy scamperings seem cousins to Shostakovich. The last-movement theme and variations are predominantly lyrical, and Pike maintains a singing line even when triple-stopping. The rapid arabesques of the short cadenza neatly anticipate The Lark Ascending which follows, given a gentle, rippling performance. The recorded sound is well balanced and clear.