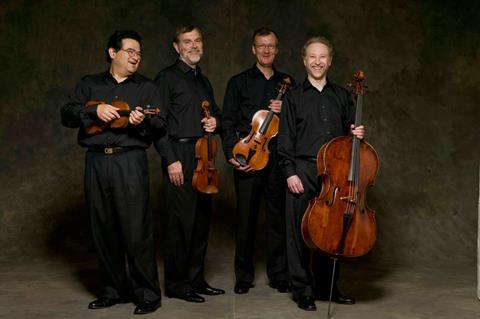 The Endellion Quartet is now 40 years old, and still has three of its founder members – second violinist Ralph de Souza joined in 1986. As part of their celebrations they commissioned four new works, which received their London premieres in this concert. As cellist David Waterman explained from the platform, the quartet repertoire is packed full of masterpieces, but most of them are long: these works all last ten minutes or less. Jonathan Dove’s Vanishing Gold features calls from two possibly extinct creatures, the golden toad of Costa Rica and the golden coquí of Puerto Rico, whose two-note call features in the work, first heard chattering around a weaving melody in first violin and cello. Later there is a melancholy viola passage, in which Garfield Jackson was beautifully expressive.

In Giles Swayne’s ENdellionIGMA there is more soulful viola, as the four instruments gradually coalesce into a single entity. De Souza had a good work-out at the opening of Prach Boondiskulchok’s Ritus, with much pizzicato and ricochet, and a similarly energetic passage for cello at the end. Sally Beamish’s A Myndin’ is a beautiful, light-textured, gentle work. The concert was topped and tailed by intense, dramatic performances of Beethoven’s F major Quartet op.18 no.1, and Schubert’s ‘Death and the Maiden’. It was all wonderfully done.