Singing during practice can help improve sound and characterisation

Cellist Laurence Lesser suggests that learning to listen to your voice constructively isn't easy, but it helps to set musical feeling directly into motion 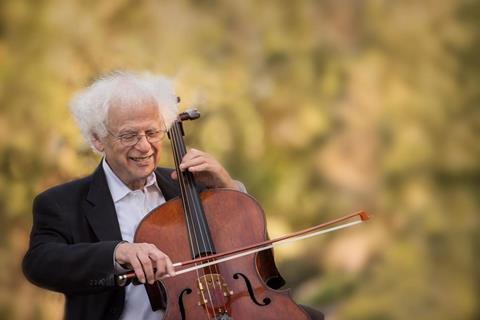 Sometimes we forget to relate technical aspects of cello playing to their musical purpose. Technique is, after all, just one resource – we also need knowledge of musical structure and of the cultural soil in which a composer has created his work. The goal of our technical study is to master the mechanical skills so well that we no longer need to think about them.

Ultimately, musical ideas are conveyed through sound. The sound of the instrument is made by the string vibrating from side to side and pressing down from above can kill it. Since the bridge is arched and the string is round, on up bows I push the string toward the left by slightly angling the bow in the direction of the lower string and do just the opposite for the down bow, with the bow angled closer to the upper string. This cushions the energy of the arm so that the tone is not choked and produces the greatest amplitude of string vibration.

Next, we can consider how to find the music’s character. My teacher, Gregor Piatigorsky, used to call the cello a ‘one-note instrument’: we usually play just one note at a time. So in my playing I aim for a vocal quality. This is not necessarily always a singing cantabile line, though, since the voice is also used to speak. I begin by singing a phrase and studying what I hear myself do. However, learning to listen to your own voice constructively is not easy. (Mine isn’t pretty, but it is all I have!) With practice it is possible to observe nuances such as the relative intensities of one note to another, articulation, intonation, tone colour and vibrato.

‘Thinking’ the shape of the phrase can teach us a lot about structure, and is a necessary component of playing, but singing is the best way to be in touch with one’s natural intuition. The voice can become the manifestation of combined intuition and rational musical thinking. It works particularly well because each person’s voice is unique and that is what we look for in an artist. Singing also has the advantage of elevating the process from mere thought into the realm of doing. Somehow we can link the physical motion of the vocal chords to the physical motions of arms more easily than by trying to turn mental singing into physical playing: one set of muscles of the body is being related to another.

As a practice tool I have built a personal repertoire of syllables that conform to varying bow strokes. For instance, I would never use the same syllables to sing the opening of the Brahms E minor Sonata as for the opening of the Dvořák Concerto. Some notes will be hard consonants (ta, pa), some will be softer (ba or da) while other are vowels. Then I work to capture these characterisations with the bow.

Another useful trick in translating one’s musical feelings into motions of the bow arm, which I learnt from Piatigorsky, is to play a piece completely normally but with the bow hovering half an inch above the string, never allowing it to touch. This frees the bow arm and teaches a lot about gesture and bow distribution. Do this with the Brahms E minor Sonata – you will notice that some notes of the same rhythmic value use different amounts of bow. If you look at films of great players, you will see that variety of bow speed is a major contributor to expressivity.

I try to compare playing to everyday life. I’ve never heard of a cellist who spends more hours of the day at the cello than away from it. I certainly don’t! Anything physical should be related to everyday motions. If I see a student sitting with twisted shoulders I wonder if they watch television sitting in that position.

Shifting is another good example. Try a long shift from first position first finger up to third finger in thumb position. Worrying about the shift (the most common problem) results in tension. I suggest trying to go for the note using the same motion that you would if you were reaching to grab something in front of you. The movement comes from the upper back and shoulder blades – not the third finger. Now the shift is freer, the shape of the arm isn’t distorted and you will have better success.

Conversely, if the shift is from a high note down to a lower position, experiment by first touching your nose with your first finger. You see that the gesture is led by the hand or the finger – not the back or shoulder blades. From such everyday motions, we can observe that upward shifts originate in the back and those going down come from the forearm, hand and finger as a unit.

Another example that relates cello playing to everyday life comes from Hugo Becker, who is reported to have said that the left hand represents thought and the right hand the tongue. Usually we think first, then speak. The opposite can get us into trouble! The same with cello playing: when a string player has difficulties with coordination it is usually because the bow has moved too soon, rather than the left hand late.

I always try to tell students what to do rather than what not to do. It’s always better to have something positive in mind. If a problem becomes the focus of attention it can have a negative impact. For example if I say, ‘For 15 seconds don’t think about turkeys,’ you can’t help but think about them. On the other hand if I say, ‘What is your favourite flavour of ice cream?’ you will stop thinking about turkeys. Usually the positive approach eradicates the negative.

This article was first published in The Strad's September 2005 issue