How to produce a strong, uninhibited sound without pressure, by cellist Joel Krosnick 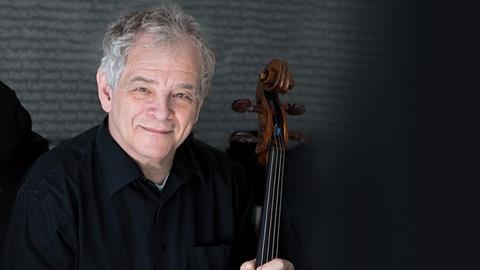 Sound starts in the left hand – just listen to any of the early 1920s recordings of Casals: Saint Saëns’s The Swan or Rubinstein’s Melody in F major. Turn up the volume, put your ear next to the speaker and you will hear Casals’s fingers landing percussively on the strings. If the top cello string is tuned to an A and the pitch is changed by placing a finger on it, a new string length is created. You can’t just push the string down – even a descending note has to be produced with an energy that definitively and immediately makes a new string length. This is not just a mannerism of Casals, but an acknowledgement that until the fingers of the left hand land on the fingerboard there will be no newly defined contact point for the bow. The finger should drop on to the string and then relax. What remains is the energy channelled through your properly aligned arm to the string and fingerboard. Refer again to Casals. Listen to a Popper Mazurka and you will hear that it sounds lighter and faster than it is possible to play.

For the finger to be able to produce this quick, brilliant stroke, the left arm must be aligned. The fingers should be solid on the string – but you don’t have to put holes in the fingerboard. This is not a catapult or a drill press. I do not continue pressing into the instrument. My finger is resting on the string and that is all that’s needed. I prove to myself that I am not pressing by practising scales and looking at my finger joints – especially the first and second joint – to see if they are vibrating and loose. I am not grabbing with any fingers, including the thumb. The angle and position of the thumb varies slightly, depending on which finger I am using, as it balances the hand. If I grab then I no longer have the freedom to swing my fingers and get the brilliant stroke from which the vibrato comes.

Focusing on the bow, the right hand must receive the energy as it travels down the arm to the stick. I lean on the stick and align the energy to meet the tension of the string at the point of contact. I don’t squeeze or grab the bow, because holding it tightly inhibits the drawing motion. I use the thumb with the index and middle fingers of the right hand in a ‘cooperative venture’. Often I practise using only these two fingers and thumb – just to see if the energy is coming from the rib cage, over the shoulder blade, through the shoulder, down the arm, around the elbow, through the wrist to the fingers and connecting with the stick. I try to keep a good alignment in this energy passageway.

So far I am just pulling and pushing the bow; I am not gripping or picking it up. From the upper two thirds out to the tip, I will probably lean on my first finger a bit more than the middle one, but it depends where I am in the bow. The simple contact point of the bow regulates which finger transmits more energy. At the frog the weight is probably more on the middle finger, but there isn’t an exact switching point.

There are many times when we are in between a down bow and an up bow, or changing strings. Therefore the bow is unstable and the continuity of sound depends on balancing action of the little finger and the finger next to it. It becomes the ‘captain’, while the fourth finger stays as the assistant. A good example of this situation is the Prelude of the Suite no.4 for Solo Cello in E flat major by Bach. There will be a moment when I am not going left or right and the sound stops. If you are in the upper part of the bow and move it quickly, you can almost get rid of that spot. However, on an up bow as you get nearer the frog, the little finger must act as a guide to relieve the friction of the index finger, so that the sound is not crushed at the frog when you go into a down bow. I am not talking about smooth bow changes, but simply about concentrating on the balance in the back of my hand. If the bow does not keep moving, the sound will be suffocated.

However, when you change direction, it is necessary to slow the bow. I do not take the energy out of my first two fingers but, instead, add weight to the back of my hand. The energy is put down on the stick and is answered with the appropriate bow speed. As an exercise, I practise scales using only two fingers on the bow – the first finger is firm while the little finger is alert and resting on the stick.

I concentrate on the energy placed on the stick – after the attack I release rather than pick up the bow. The string should ring. You cannot get that sound quality if the front part of your hand continues to apply pressure. Friction should give way to something lighter and bow speed should slightly increase. If you get the core of the string under the bow and keep the vibration going, it will sound like perpetual motion.

This article was first published in The Strad's March 2005 issue.