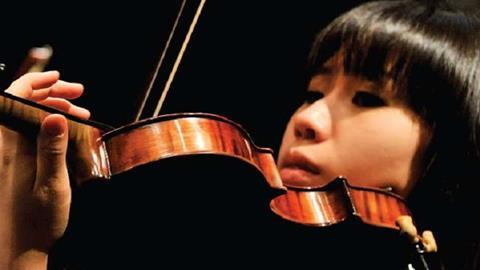 You should be maintaining your full height when playing. You should also keep the full width of the shoulders and the free movement of the ribs in relation to the spine. Many string players are poor breathers, and this does much to limit technical and musical freedom and tone production – Mary McGovern, The Strad, July 1999

The first prerequisite to having a beautiful tone is to have the sound in your head. Just like we speak with the accent of the language we hear, we will want to produce a tone like those we hear from our peers, teachers and in recordings and concerts.

The sound is internal, not external. We must have an efficient, flexible and balanced body that is able to produce that sound.’ – Tanya Carey, The Strad, May 2003

When you move the bow closer to the bridge or further away, not only does the volume change, but so does the quality. This is because a musical note is not a single tone, but a whole series of tones known as partials. All except the prime tone are called upper partials. Upper partials are faint compared to the prime tone which gives the pitch to the note; but the quality of the sound is determined by the number and relative intensities of the partials.

What you hear as a player, with the instrument close to your ear, is quite different from the sound that the audience hears from a distance. This is because the upper partials in the sound are the first to drop off at distance, while lower partials travel further.

If you play near the bridge, where more and clearer upper partials are produced than when playing nearer the fingerboard, the sound next to your ear may seem edgy; but because those upper partials do not travel as far as the audience, the sound they hear is mellow and sweet.

The danger is that if you try to produce too mellow and sweet a tone directly under your ear and this is the exact sound you want somebody many metres away from you to hear, then what reaches them may end up sounding too weak. – Simon Fischer, The Strad, September 2005

Some violinists have a very bad habit of starting the stroke by biting it out with great pressure. Now this is altogether wrong, as the tone is at once killed. The student must remember that the pressure from the bow on the string, even when an incisive attack is required, should never be more than is absolutely necessary to set the string in instant vibration. – André La Tarche, The Strad, September 1894

The only place at which we can produce a clear sonorous tone, without any damping effect, is in the lower third of the string – say midway between fingerboard and bridge. By applying an even pressure at the same point of the string we shall experience no difficulty in producing a sound and full tone of satisfactory character.

A fortissimo tone, therefore, can only be produced near the bridge. – Emil Krall, The Strad August 1911

The ringing sound of the pizzicato can be used to demonstrate that resonance carries on after the action is completed. I emphasise that the magic and beauty of sound is that it is released, not simply produced.

Order your fingers to do their work always fortissimo and to leave the graduation of tone-power entirely to the bow. Even in pianissimo, clearness of tone is not obtained without solid finger pressure. – Carl Courvoisier, The Strad, March 1893

Vibrato is an integral part of tone and sound projection. Volume is controlled by the bow, but when a student masters the mechanics of using a narrow or wide, fast or slow vibrato, the palette of tone colours is greatly enhanced and expanded. – Laurinel Owen, The Strad, May 2003

And the nearer the bridge, the harder the tension of the string, so again more pressure is needed. Therefore, using a lot of bow near the bridge requires a great amount of pressure. – Simon Fischer, The Strad, July 1997

‘People pay a lot of money to come to my concerts. I want them to hear me’. – Mstislav Rostropovich, quoted in The Strad, May 2003