During a two-year concert tour of America, violinist Pablo Sarasate corresponded with his adoptive mother Amélie de Lassabathie in Paris. His surviving letters have been translated for the first time into English by Nicholas Sackman and Bastien Terraz, who present a digest of their contents 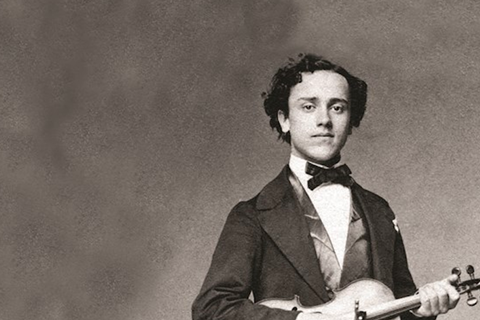 The following is an extract from The Strad’s feature on Sarasate’s letters to his adoptive mother in our June 2020 issue. To read in full, click here to subscribe and login. The June 2020 digital magazine and print edition are on sale now.

During the 1860s Sarasate struggled to establish himself in France as a performer, a difficulty that eventually compelled him to travel abroad to seek fame and fortune. On 4 April 1870 he arrived in New York to begin a tour that would encompass both North and South America. He did not return to Paris until May 1872, having given the US premiere of Bruch’s First Violin Concerto in February that year in New York. Sarasate had strongly focused objectives in mind as he embarked on his American tour, and he makes these clear in a letter (dated 12 April 1870) to Mme de Lassabathie:

I must succeed; I must achieve the goals which I have set myself, namely [artistic] success and [monetary] wealth. When will I return [to Paris]? – ‘that is the question’. Prepare to shower me with affection when I do; that’s what I ask; that’s what I will need.

On his arrival in New York, Sarasate was thrown into a whirlwind of concerts which helped to lessen his homesickness, and also enabled him to evaluate the character of the American people:

Barely recovered from the exhaustion brought about by the gruelling yet swift crossing [of the Atlantic], having arrived Monday evening, I performed yesterday in front of the American public in the enormous Steinway Hall and I was greeted by applause from more than 2,000 people. All this happened so quickly; life here is so fast-paced that it feels like a dream. (7 April 1870)

I am beginning to adjust to my new life, thanks to all my obligations which leave me no time to think, even for a minute. I bless Mr Strakosch, who makes me perform every night and even during the day. It does me the world of good; I can get away from the sad thoughts that affect me when I am alone in my room, especially at night.[…] New York is a miserable city, as are its people. Everyone lives only for business – anything else is just a hobby. The average American is the most sullen and unpleasant person that one can meet – not the kind of person one would wish to associate with. It is snowing and terribly cold! – an awful climate and a miserable city. (9 April 1870)

The climate here is dreadful; in just one day it can change from very hot to very cold, and then to snow; we have to change our clothes three times a day. All these climatic changes are terribly debilitating, and by the time that evening comes I am exhausted and having copious nosebleeds. (16 April 1870)

This is an extract from The Strad’s feature on Sarasate’s letters to his adoptive mother in our June 2020 issue. To read in full, click here to subscribe and login. The June 2020 digital magazine and print edition are on sale now.