6 ways to perfect your double-stops 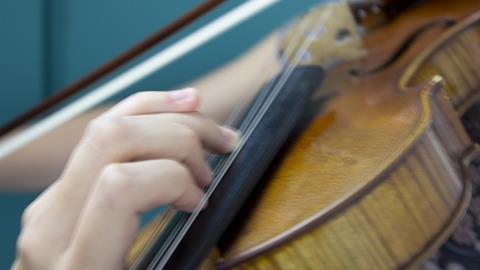 The reason why the study of double-stops is so highly advantageous for the progress of the student may be found in its great technical and musical value, which can be distinguished in four directions:

1.  All possible faults regarding holding of the hand and placing of the fingers are here conspicuously exposed; double-stopping represents an excellent corrective of such faults and an infallible means of training the correct position of hand and fingers.

3.  It exacts great strengths, not only that of gripping, but in many cases of individual hammer-strength of each finger.

4.  Finally it provides an excellent and indispensable training of the ear, as regards purity of intonation, as well as beauty of sound.

As regards the hand-position, the hand should be sufficiently raised so that the fingers may be well rounded, stopping one string without touching the other. In normal stretch this is comparatively easy, unless the fourth finger here is well founded and standing on its tip, it will easily touch the A string and thus spoil the upper note.

Three key points to watch playing in thirds are:

Folk fiddle tunes with an E or A string drone are great tools for forcing students to bring their hands up and over the fingerboard, curving their fingers so as not to stop the open string and setting the left-hand fingers correctly.

Dr H.R. Allan, The Strad, On Playing Thirds in Tune

When playing double-stops, it is essential to keep the hand and fingers as soft and free as they are when playing the simplest single notes – in other words, as free as they are when you are not even playing the violin. Doing mobility exercise is a good way to discover how to give and release, in the hand and fingers, while still maintaining enough muscle tone to play. When playing in octaves, one of the most important elements is that the entire left hand is free of tension. A chief cause of tension comes from not releasing between octaves, which is like pedalling a bicycle while continuing to squeeze the brakes.

When children play with a poor quality of tone on double-stops, it is usually because the angle of the bow is not correct and one string is getting more pressure from the bow than is the other string.