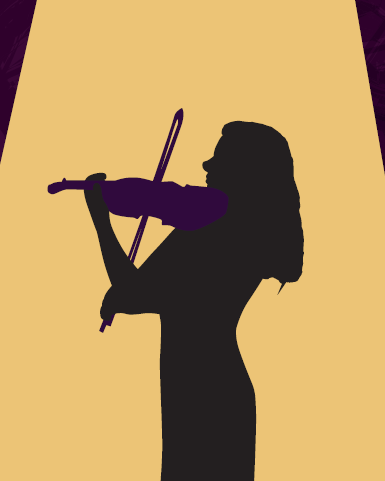 We all have an inner voice but not all of us are able to connect with it and let it guide us. I know that many musicians may disagree, but I believe that copying is the first step to finding your own path. In every art form you start this way – you can’t help being influence by your mentors or heroes. I encourage students to listen to recordings and go to concerts. I then try to get students to describe the mood and colours of the pieces they’re playing with adjectives, and see how they can translate them with the bow and with vibrato – something I consider to be the real stamp of an artist.

It is, to the majority of violin students, so much easier to imitate the teacher’s manner – even unconsciously – than to devote personal energy to the work of interpretation that they acquiesce, as a class, in the more or less machine-made process of education. Beware of exacting an emotional duplicate of the performance. Don’t think that because a child is a child he has no instinctive artistic preferences, or that it is always obstinacy which prevents him from reproducing effectively on his violin the spirit of what you have played to him so earnestly and so often.

Observation is essential, but not all. It is difficult to understand a minuet as opposed to a mazurka or a tango without any knowledge of the movements of these dances. It’s impossible to guess the character of a loure without some help from contemporary writings from dance masters and players. It’s unlikely we can begin to respond to the C major Fugue in Bach’s Third Sonata without understanding the significance of the chorale on which it is based. Sometimes we need to seek out information that may shed light on the matter in hand, whether Hungarian speech rhythms for Bartók or the text of Schubert’s ‘Death and the Maiden’.

We’ve all heard that no two string players have the same vibrato – that vibrato is akin to snowflakes or fingerprints, unique to each individual. To begin a vocabulary of options for vibrato, practise varying how you mix and match width, pressure and speed. As you experiment, the possibilities are infinite. You can multiply the possibilities even further by starting a note without vibrato, sneaking into a slow, wide roll that gradually speeds up and then ending on a still tone or vice versa.

Many players have, at some point, had the disappointing experience of thinking that their playing is at a certain level of expression, only to find, when they play back a recording of themselves, that their playing is far less interesting than they had imagined it would be. If the player, instead of channelling their physical energies into the string, moves their body forward in an expressive way, or makes an expressive face, or becomes tense in their left hand, then of course the microphone is not going to pick up on any of these physical changes.

I recently attended a concert series at London’s Southbank Centre where ten different string quartets gave performances of Peter Maxwell Davies’s ten Naxos Quartets. While there were obviously musical differences, I became increasingly aware of very different attitudes to the interpretation of the music through facial expressions, body movements and players’ use (or abuse) of their instruments. Did they feel they were intensifying the music’s meaning? Whatever the reason, the truth is that it pulls the focus of the performance squarely on to the individual player, and it’s horribly distracting to watch. In a quartet individual personalities should surely be subsumed into a group identity.

If you’re going to engage your audience, you first need to define your own presence. The simplest definition of presence is: being fully here, now. Being present involves mental, physical, emotional and spiritual dedication to what we are doing. The greatest obstacle which prevents performers from being in the zone is ‘the self-critic’ or ‘inner voice’. The first prerequisite for presence is focusing on the musical message rather than yourself. The characteristics of performers with presence are those who have positive attitudes and thoughts and the ability to focus and visualise their goals and the courage to trust that ability to work for them.

No music is more capable of expressing emotion than that produced by the string family. Which is the most seductive, a string or a wind orchestra? Which most warmly thrills young blood and lights in the eyes of youths and maidens beautiful but dangerous fires? Or, to climb higher on the ladder – what does the bulk of the work, and sustains the human thread in the Overture, the Symphony, the Symphonic Poem? Why, strings of course.