The viola should sound like a human voice, says Nobuko Imai 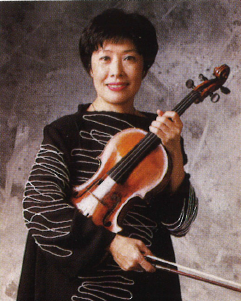 I was brought up in Japan, where I started to learn the violin at six, but when I was ten I changed to a teacher who was steeped in the Russian school. He used Auer's system of scales, which is very strict, and I did endless double-stops on thirds, sixths and octaves. I would do two keys a week, and I think I spent about an hour a day doing this. Actually it was the best thing I ever did. Its not a complicated system, but it means that the first and third positions are in tune, and this stays with you.

I also did the usual studies - Dont, Mazas, Kreutzer, Rode - as well as virtuoso repertoire: Wieniawski, Sarasate and Ysaÿe. I also played works by Prokofiev and Glazunov, but I probably didn't perform enough serious works at this stage. When I was 15 I went to the Toho School in Tokyo and learnt with Toshiya Eto, who had taught at the Curtis lnstitute before coming back to Japan. He was really teaching the Zimbalist school of playing, concentrating on sound production - making a resonant tone without pressing too much. This inevitably meant open strings for the first six months! Eto opened my ear to creating colours on the violin and it was at this stage that I really started to enjoy music.

I started the viola at 15 - a normal age at the Toho School because everyone had to take the viola as a second study with violin. I had always been attracted to the viola because of its rich timbre. Playing it just felt so much freer, a really liberating experience. The thing is that I had become easily annoyed with the violin routine and for a long time it was simply what everyone around me was doing, and something which all my companions were studying. But then I really got the desire to be a musician and I think this was linked to my interest in the viola.

Around the same time I began. chamber music studies with Hideo Saito, who was a Feuermann pupil. Saito explained how the bow works expressively. He was a great mentor and I had a marvellous time studying Bartók and Debussy quartets with him. When I was at the Juilliard School Walter Trampler was another seminal figure for me, as he allowed me to discover musical individuality. In Japan you had to do exactly what the teacher requested, but his style of teaching was tremendously exhilarating. I also did a summer course with Bruno Giuranna and learnt a lot from watching his bowing - how he used energy in the right way to get a real sound.

I think it's essential to have the sort of solid technical foundation that I acquired on the violin before you even start thinking about the viola. In fact I found that when I made the switch, my fingers automatically accommodated to the different spacing. Of course you need to do some scales, but it quickly feels natural. It's the bowing action that needs adjustment. Violin bowing is lighter, but for the viola you need a relaxed arm and the pull of gravity to draw a good sound. So there's a great deal of concentrated energy in the arm, which then allows the sound to project. One of the other main differences is the articulation at the beginning of a note. The viola really needs a rhythmic impulse at the start of the note. rather like a hard consonant in speech. Vibrato on the viola needs more power, using almost an arm vibrato on the lower strings, although on the D and A it's more like violin vibrato and can be much faster.

Actually, my technical routine on the viola was almost nothing! Everything you need is there in unaccompanied Bach. I did play the Campagnoli studies, but only because I was entering the Geneva competition. The Reger suites and Paganini caprices are surely difficult enough on the viola! The hardest thing to learn only came to me over time: developing an imagination for sound. It's a subtle mix and adjustment of bow speed and pressure coupled with the right speed of vibrato. On the viola you have to find your own way, and because every viola is different in size and heaviness you have to make individual adjustments. Whatever you do, it's a question of making the viola sound like a human voice.

This article was first published in The Strad's June 2001 issue