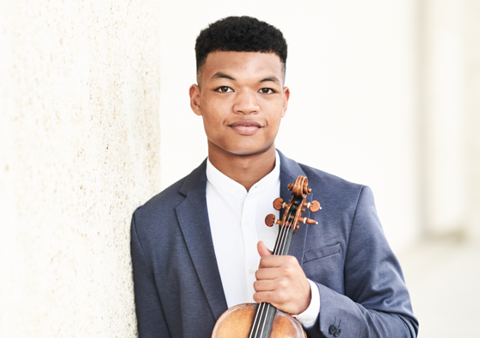 ’I’m so thrilled to be working with the Decca Classics team for the release of my debut album!’ said Goosby. ’It’s a record label that has been home to some of my favourite artists and musical role models, and I’m delighted to be joining such an esteemed roster. For me, music has always been a way to inspire others. It’s part of my quest as an artist to amplify black voices in classical music, bringing heightened recognition to this incredible music.’

Born to an African-American father and Korean mother and raised in Japan, Goosby was the youngest ever winner of the junior division of the Sphinx Competition at the age of 13 in 2010. He followed this in 2018 with third prize in the 2018 Sphinx Competition senior division. A first prize winner in the 2018 Young Concert Artists International Auditions in New York, he is also the first Robey Artist with Young Classical Artists Trust in London.

Currently pursuing an Artist Diploma with Itzhak Perlman and Catherine Cho at The Juilliard School, he recently made his Kennedy Center debut in Washington DC and in 2021 will make his recital debut at London’s Wigmore Hall. He plays a Giuseppe Guarneri del Gesu of 1735, on loan from the Stradivari Society.