The London-based Barbican Quartet won first prize of €24,000, as well as the prize for a commissioned piece 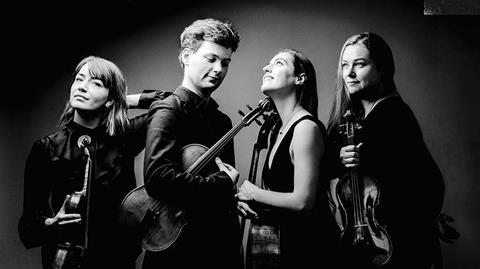 The finals of the ARD International Music Competition string quartet discipline were held on Saturday 10 September in Munich, with contestants presenting a programme consisting of quartets by Beethoven and Bartók.

The Barbican Quartet took first prize with its performance of Bartók String Quartet no.2 and Beethoven op.59 no.2. The London-based quartet, comprising violinists Amarins Wierdsma and Kate Maloney, violist Christoph Slenczka and cellist Yoanna Prodanova, won a cash prize of €24,000, as well as the prize for performance of the commissioned piece by Dobrinka Tabakova, worth €1,000.

The Integra Quartet from Japan won second prize worth €18,000, as well as the audience prize worth €1,500, made possible by the Theodor-Rogler-Foundation. The Chaos Quartet took third prize of €12,000.

The Barbican Quartet are previous winners of the 2019 Joseph Joachim International Chamber Music Competition as well as the 2018 St Martin in the Fields Chamber Music Competition. The quartet made its Wigmore Hall debut in 2017 thanks to the Maisie Lewis Award, and were 2020 St John Smith Square Young Artists and 2016 Park Lane Group artists. In 2018 the Royal Philharmonic Society awarded them the Albert and Eugenie Frost Prize.

The Barbican Quartet has appeared in such festivals as Peasmarsh Festival, Vibre! Quatuors à Bordeaux, Zeist Muziekdagen, Montreal Chamber Music Festival, IMS Prussia Cove and Aldeburgh. Its performances have been broadcast on NPO Radio 4 and BBC Radio 3. The  quartet currently studies with Günter Pichler at the Reina Sofia String Quartet Academy in Madrid, as well as the Quatuor Ébène in Hochshule für Musik München. Among their mentors are the Belcea Quartet, Alasdair Tait, Andras Keller, David Waterman, Ferenc Rados and Rita Wagner.