The British ensemble receives €10,000 and a special prize for the best interpretation of a work composed before 1830 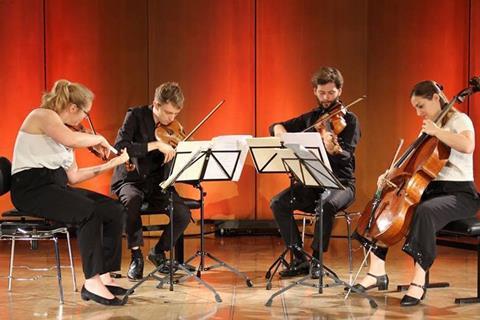 The London-based Barbican Quartet has won the 8th International Joseph Joachim Chamber Music Competition, taking place in Weimar. In addition to the first prize of €10,000, the ensemble also received the special prize for the best interpretation of a work composed before 1830.

Second prize of €5,000, and special prize for best performance of a contemporary work, went to the Marmen Quartet, also from the UK.

Third prize of 2,500 euros was awarded to the Cosmos Quartet from Spain, while Trio Hélios from France won the special prize for best performance of a Romantic work. All three top-ranked ensembles gave appearances at a concert on Sunday.

Founded in 2014 at the Guildhall School of Music and Drama by violinists Amarins Wierdsma and Tim Crawford, violist Christoph Slenczka and cellist Yoanna Prodanova, the Barbican Quartet won the 2018 St Martin’s Chamber Music Competition and made their Wigmore Hall debut in 2017.

The Quartet currently studies with members of the Belcea Quartet in the UK and with Günter Pichler at the Reina Sofia String Quartet Academy in Madrid.

Altogether 19 piano trios, string trios and string quartets drawn from all over the world took part in the competition, organised by the University of Music FRANZ LISZT Weimar. Held every three years, the competition is named after the violinist, conductor and composer Joseph Joachim (1831-1907), who was a member of Franz Liszt’s circle during his stint as Weimar concertmaster.