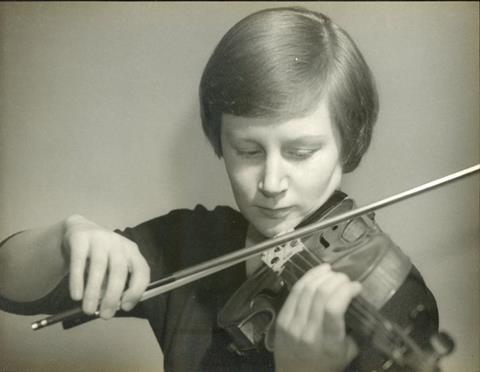 One of Scotland’s most accomplished violinists, Daphne Godson died on 15 August 2022 aged 90. Over her long playing career she was associated with ensembles such as the Scottish Baroque Ensemble, the Bernicia Ensemble, the Pegasus Trio, Merlyn Trio and the Scottish Early Music Consort.

Born on 16 March 1932 in Edinburgh, Edith Muriel Daphne Godson attended George Watson’s Ladies’ College and the Waddell School of Music. One of her earliest notices appeared in The Scotsman in March 1950 when she was only 18, following a Saltire Society recital at Gladstone’s Land in Edinburgh. The concert also featured the counter-tenor George Rizza (later prominent in the world of music publishing). The reviewer noted that Godson ‘had, besides her beautiful tone, a confidence and a maturity about her playing that was quite exceptional’. A solo piece by Kreisler was ‘a tour de force, but it was her grasp of the implications of [Dowland’s] “Go, nightly cares” which was the more remarkable’. On the same page of the same issue a review of the Waddell Junior Orchestra remarks that Daphne Godson, among others, ‘revealed more than latent musicianship’.

She attended the Royal Academy of Music in London and, after being awarded a Belgian State Scholarship in 1954, went on to study at the Royal Conservatory of Brussels with the Hungarian-born violinist André Gertler (who also taught André Rieu). In 1957 she won first prize in the international violin competition held during the Darmstadt Festival of Contemporary Music.

The following year, 1958, she won a consolation prize of 2,000 zlotys in the third International Henryk Wieniawski Violin Competition in Poznań, Poland, one of five candidates representing Britain. Among the judges were David Oistrakh, Max Rostal and Gioconda de Vito.

Returning to Scotland she was active as a solo violinist and as a member of Edinburgh Barock, the Merlyn Trio, the Pegasus Trio and the Bernicia Ensemble, recording Rameau’s Pièces de Clavecin en Concert for Saga in 1966 and contributing to the 18th-century volume (‘Baroque and Classical Scotland’) of the LP series A History of Scottish Music (Scottish Records, 1972) with fellow violinist Leonard Friedman. There were also performances and recordings with the Scottish Baroque Ensemble – directed by Friedman – and with the Scottish Early Music Consort (Mary’s Music: Songs and Dances from the Time of Mary, Queen of Scots; Chandos, 1984). In 1997 she was violinist and leader on the CD The Big Birl (Lismore Recordings), original compositions by Robert Mathieson, Pipe Major of the Shotts and Dykehead Caledonia Pipe Band.

After a recital in Glasgow with her pianist partner Audrey Innes in April 1962, Anthony Hedges commented in the Musical Times that they, ‘both as a team and as individuals, deserve to be widely heard outside Scotland. Each couples a great sense of artistry with admirable technical accomplishment; each has an ardent musical personality that communicates enthusiasm and enjoyment to the listener.’ In May 1962 she appeared at London’s Wigmore Hall in one of the Incorporated Society of Musicians’ Young Artists’ Recitals.

An interest in early music (she was also an accomplished rebec player) did not preclude composers of other periods, including Hans Gál, whose Concertino for violin and strings she played at Gateshead in 1963 (‘in which she showed technical mastery, beauty of tone, and maturity of interpretation’, according to the composer Arthur Milner, who reviewed it in the Newcastle Journal), Schoenberg’s Pierrot Lunaire (with the Bernicia Ensemble, Aberdeen, 1968), and Kenneth Leighton, at whose memorial concert she played in 1989 – the penultimate of 18 appearances she made at the Edinburgh University Reid Concerts series between 1959 and 1999. She also played in the University of Glasgow’s McEwen Memorial Concerts of Scottish Chamber Music.

There were more than 25 radio broadcasts between 1959 and 2004, including music by Hans Gál, Kenneth Leighton, Robin Orr and John Casken; and she was the violinist in a broadcast of David Greig’s play, Dr Korczak’s Example, first broadcast in 2004 and repeated as recently as this year on BBC Radio 4 Extra.

Among her avocations were hillwalking, reading and dressmaking. She could have had an international career, but said she was ‘perfectly happy in Scotland’.