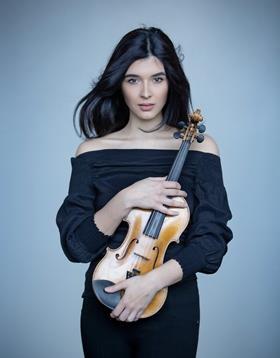 Russian violinist Rimma Benyumova has been appointed concertmaster of Staatskapelle Berlin under the baton of Daniel Barenboim.

A postgraduate student of Professor Ulf Wallin at Hochschule für Musik ’Hanns Eisler’ in Berlin, Benyumova has won several international violin competitions, including the Victor Tretyakov Competition, Schoenfeld International String Competition, D. Oistrakh and Anton Rubinstein competitions. She has appeared as a soloist with the Munich Symphony Orchestra, the ’I Pomeriggi Musicali’ orchestra in Milan, the Philharmonic Orchestras in Opole, Poznan, Krakow, the Russian State Symphony Orchestra and the Moscow ‘Virtuosi’.

She has performed internationally at venues including Carnegie Hall in New York, the Berlin Philharmonie, the Moscow Performing Arts Center, the Zaryadye Hall, the Teatro del Vermo in Milan, the Piano Salon Christophori, and the Bellevue Palace in Berlin.

Her orchestral experience includes playing as deputy concertmaster at the Philharmonie Dresden, the orchestra of the Deutsche Oper Berlin as an academy member and the Russian-German Music Academy under the direction of Valery Gergiev.

Benyumova plays a violin made by Camillus Camilli (Mantua, 1741), made available to her from a private collection.