The autumn programme comprises six online performances, including both livestreamed and pre-recorded concerts 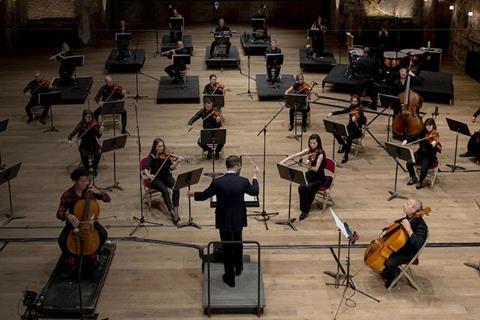 Principal Conductor Designate Santtu-Matias Rouvali opens the series on 26 October with a programme of American music: Aaron Copland’s Appalachian Spring; Steve Reich’s Music for Pieces of Wood (with Rouvali as one of the five percussionists); Stravinsky’s Dumbarton Oaks and Dances in the Canebrakes by Florence Price (1887-1953), an African-American composer whose works have been rediscovered in the last few years.

Esa-Pekka Salonen conducts Britten’s Les Illuminations (with soprano Julia Bullock) and Ravel’s Mother Goose (complete ballet) for the second concert on 29 October. Both Rouvali and Salonen’s concerts will be broadcast live on BBC Radio 3 alongside the audio-visual live stream.

On 12 November Elim Chan, who would have conducted the Philharmonia at Edinburgh International Festival this summer, leads a programme including Jessie Montgomery’s Strum and Sergey Khachatryan performing Mendelssohn’s Violin Concerto. In the final concert on 30 November, Nicola Benedetti returns in an all-Beethoven programme with conductor Pablo Heras-Casado, performing Beethoven’s Violin Concerto and the Second Symphony as part of Beethoven 250 celebrations.

The second strand of the autumn schedule comprises the Philharmonia Sessions – a series of free, pre-recorded digital performances, conceived and created for an online audience. Following three films over the summer, these will continue with two new releases: the first, on 24 November, features the orchestra’s Principal Conductor and Artistic Advisor Esa-Pekka Salonen conducting Beethoven’s ballet Score, The Creatures of Prometheus, in a dramatic format filmed at Battersea Arts Centre with Stephen Fry narrating a new script by Gerard McBurney.

The next Session, on 5 November, showcases conductor Jakub Hrůša and cellist Alisa Weilerstein in an all-Dvořák programme featuring his Rondo and Silent Woods for cello and orchestra. Both Philharmonia Sessions will be premiered, free-to-view, on the Philharmonia’s YouTube channel.

Although the Philharmonia is not yet performing regularly for live audiences, the orchestra has begun to play to socially-distanced audiences this autumn, not least at Garsington Opera’s production of Beethoven’s Fidelio. Plans are being developed for performances for live audiences at venues across the UK.

Alexander Van Ingen, Chief Executive of the Philharmonia, said: ‘We are thrilled with the success of our online Philharmonia Sessions series, and excited to announce a strong programme of concerts for the autumn. We are proud to have been the first UK symphony orchestra to create exceptional digital content this summer, freely available to an international audience, and now the first UK orchestra to return to live opera performance in partnership with Garsington Opera. Thanks to the generosity of the Philharmonia family of supporters, we have been able to weather the storm and continue to present superb performances for an audience across the country, and I am immensely grateful to our players for their dedication and brilliance as we adapt to new ways of presenting great music and continue to develop our performances across the UK.’

The Philharmonia is also keen to remind viewers that supporters’ donations keep the orchestra playing. For more information on how to support the Philharmonia please visit the website or contact development@philharmonia.co.uk.