Melissa Reardon joins the ensemble, which has additionally signed to Dinin Arts for worldwide general management 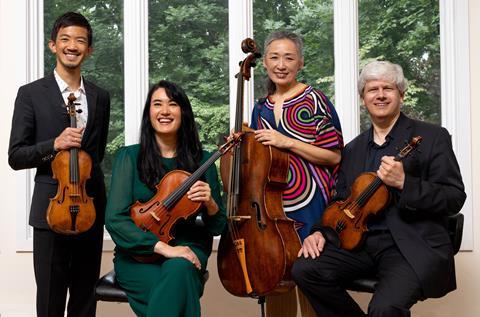 The Borromeo Quartet has appointed Melissa Reardon as its new violist, following the departure of Mai Motobuchi. The news coincides with the quartet’s signing with Dinin Arts Management and Consulting.

’As an admirer of the Borromeo’s artistry for many years, it is a true honour to work with them and share their first-rate performances worldwide,’ commented Sarah Dinin, founder and director of Dinin Arts. ’I am especially delighted to be a part of this period of renewal for the quartet as they welcome Melissa and embark on an exciting new chapter.’

Grammy-nominated violist Melissa Reardon has enjoyed an international solo and chamber career spanning a wide range of musical genres. She is the artistic director of the Portland Chamber Music Festival, artist in residence at Bard College and Conservatory and a founding member and the executive director of the East Coast Chamber Orchestra (ECCO). Reardon has toured both nationally and internationally as a member of the Ensō String Quartet from 2006 until its final season in 2018, . She has appeared in numerous festivals across the United States and around the world, and has toured with Yo-Yo Ma’s Silk Road Ensemble and with Musicians from Marlboro.

The Massachusetts-born musician won first prize at the Washington International Competition, and is the only violist to win top prizes in consecutive Holland America Music Society (HAMS) International viola competitions.

She held the post of associate professor of viola at East Carolina University from 2007 to 2013, and earned degrees from the Curtis Institute of Music and the New England Conservatory.

The Borromeo Quartet, comprising violinists Nicholas Kitchen and Kristopher Tong, and cellist Yeesun Kim, has been ensemble-in-residence at the New England Conservatory and Taos School of Music, both for 25 years, and has enjoyed a long-term relationship with the Isabella Stewart Gardner Museum for over two decades, where it continues to regularly appear.

It is quartet-in-residence at the Heifetz International Music Institute, where first violinist Kitchen is artistic director. The quartet was also in residence at the Library of Congress and the Chamber Music Society of Lincoln Center, where the quartet has worked as educators and performers. The ensemble joined the Emerson Quartet as the Hittman Ensembles in Residence at the Peabody Institute in Baltimore, and was recently in residence at Kansas University, the San Francisco Conservatory, and Colorado State University