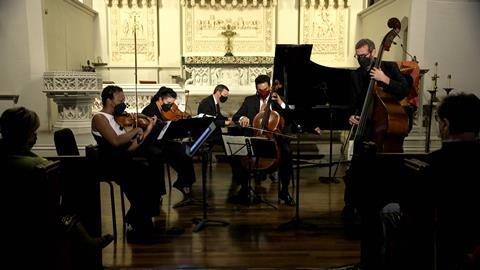 During the continuing uncertainty wrought by the pandemic – as concerts continue to be brought back to life, then rescheduled, then cancelled altogether – the long-running Music Mondays series can only be applauded. Many of its offerings, including this one, have been live-streamed.

This convergence of five of New York’s best musicians chose works inspired by Schubert’s ‘Trout’ Quintet, which opened the evening. Delicacy and vigour infused the first movement, admirably articulated, followed by the caress of the Andante. The sizzling third movement had occasional borderline scratchy timbres – all apparently by design, in contrast to the velvety episodes; and the finale had an appealing rusticity.

Intlanzi Yase Mzantsi (‘The Fish from South Africa’) written in 2006 by Bongani Ndodana-Breen was inspired by the fourth-movement melody of the Schubert. Against a tapestry of pizzicatos and rhythmic drones, the piano blinks in joyful counterpoint. The result sounded not unlike some of the small Irish folk ensembles common in local pubs. Next came Judith Weir’s A Song of Departure (2017), born from Schubert’s ‘Abschied’ as a valentine to the Schubert Ensemble. The players duly imbued it with gentle nostalgia.

As a bookend to the Schubert came Vaughan Williams’s Piano Quintet in C minor, launched with sweep and passion in the first movement. Watching the tendrils of the rapturous Andante unfold and flower was a joy, and that warmth continued to blossom in the finale.