Coaching young players in string quartets requires special strategies, but success can develop their vital life skills as well as improving musical abilities. Chamber music tutors shared their secrets with Tim Homfray in the August 2008 issue of The Strad 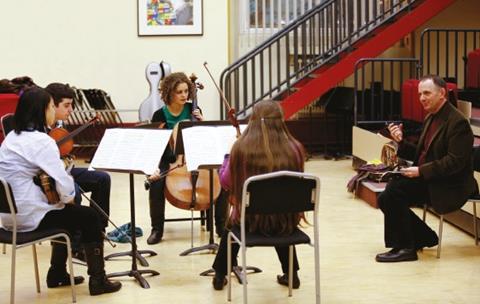 String quartet playing is one of the most rewarding of musical experiences. Possessing perhaps the greatest chamber repertoire, the quartet medium is responsive to endless subtleties from performers. The finer points of quartet playing, however, are not immediately evident to the average 8-year-old musician – or to the average 14-year-old, come to that. Even young musicians of advanced technical abilities may not have much idea of what to do with a quartet. As Evan Bennett, director of music at Walnut Hill in Massachusetts, a specialist performing arts school, observes: ‘Kids who do not have much experience will just play through a piece, scratch their heads and say, “OK, we’re done.”’ (The students of Walnut Hill School are in their mid-teens, and already technically accomplished.)

Felicity Lipman, a private violin teacher and coordinator of chamber music at the junior department of the Guildhall School of Music and Drama in London, says that when bringing younger players together, it’s best if some of the basic skills of quartet playing have been developed in advance. ‘They have to have control of their sound and expression, so that they have some kind of voice that can express character in their playing.’

Lipman finds it easier to establish the basics in smaller groups, particularly in duos. Young players need to learn practical things, such as counting bars. They also need to learn good manners: when one player gets lost, the others have to stop and, as Lipman explains, ‘not just carry on because they can and they know where they are. And they need to be ready to restart playing at the same time.’

Duos are also a good platform for musicians to learn how to match their tone quality with that of another player, to be able to accompany or to play the lead. It’s much less challenging with just two people, ‘and if they have an idea how to do these things before they come into a quartet you’re on to a winner,’ Lipman says.

Angus Anderson, chamber music tutor at the Royal Scottish Academy of Music and Drama, says that when putting a quartet together, ‘you must have four individuals who are all technically at the same level.’ They should also have sounds that are going to blend, says Nicholas Hadwen, head of strings at Wycombe Abbey girls’ school, and personalities that are going to match as well.

’You have to train children to give an honest appraisal of what they think is working well before giving them constructive criticism’ - Felicity Lipman, Guildhall School of Music and Drama

Right from the start they need to have discipline in the way they work. ‘They have to come to a rehearsal with the music prepared and all the right equipment: music stand, pencil and rubber,’ says Lipman. ‘And on time.’ Anderson agrees with Lipman’s emphasis on discipline.

‘You have to give them strict boundaries. They have to turn up on time. They must all learn the music, and develop the dialogue that is so much part of quartet playing. And they all have to play in tune: no one wants to listen to someone who is out of tune.’

Both Hadwen and Lipman get their young quartets to play scales and arpeggios together. Hadwen suggests that one player should hold a pedal note for the others. He also makes it clear that quartet intonation is based on the cello.

The choice of repertoire depends on a number of factors. The players’ level of ability is an obvious one. There is also the matter of interest in the parts: younger players can get fed up with the repeated quavers of some Haydn and Mozart quartets. Hadwen advocates David Stone’s Miniature Quartet no.1: ‘It’s a lovely piece, and technically not very difficult.’

Anderson is in favour of the Romantic repertoire – ‘Mendelssohn, Borodin – where everybody has an interesting part.’ These works require quite advanced players, but Anderson feels ‘it is hard to do serious chamber music with people who are not technically quite proficient’.