Milena Pajaro-van de Stadt will leave the ensemble in August 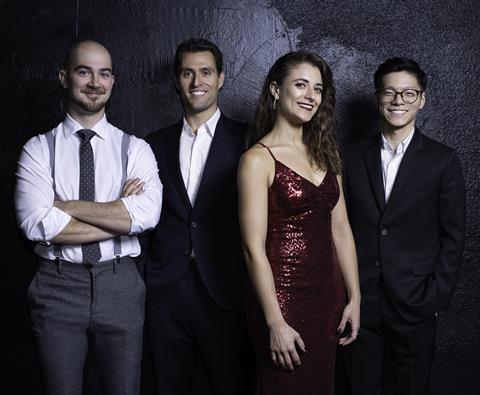 The Dover Quartet has announced that its violist Milena Pajaro-van de Stadt will be leaving at the end of the summer season in August to pursue other musical interests and opportunities.

’It is bittersweet that our time making music with our dear friend and colleague is coming to an end, but we are excited for the new ventures ahead of her,’ stated the quartet on social media.

’Please join us in wishing Milena all the best! The odds of having had such a wonderful run were a Milen-a-one, but we did it. Meanwhile, stay tuned! We look forward to sharing exciting news about our new violist in the not-too-distant future!’

Pajaro-van de Stadt has appeared as a soloist with the Tokyo Philharmonic Orchestra, the Jacksonville Symphony, and the Sphinx Chamber Orchestra. She has appeared in recital at Wigmore Hall and served on the juries of Sphinx Competition and the Banff International String Quartet Competition.

A violin student of Sergiu Schwartz and Melissa Pierson-Barrett for several years, she began studying viola with Michael Klotz at the Bowdoin International Music Festival in 2005. Pajaro-van de Stadt graduated from the Curtis Institute of Music, where she studied with Roberto Díaz, Michael Tree, Misha Amory, and Joseph de Pasquale. She received a master’s degree in string quartet performance from Rice University’s Shepherd School of Music, where she studied with James Dunham as a member of the Dover Quartet.

As well as being Penelope P. Watkins Ensemble in Residence at Curtis Institute of Music, the Dover Quartet holds residencies with the Kennedy Center, Bienen School of Music at Northwestern University, Artosphere, and the Amelia Island Chamber Music Festival.