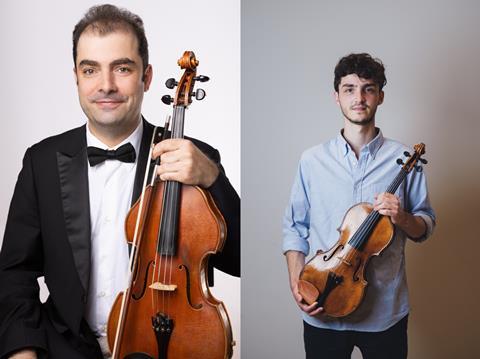 He received his bachelor’s and master’s degrees from the Manhattan School of Music where he studied violin and viola with Pinchas Zukerman, Michael Tree and Patinka Kopec. Before leaving for New York, he studied in Israel with Haim Taub, Ora Shiran and Yair Kless. He also performed in masterclasses given by Isaac Stern, Itzhak Perlman, Dorothy DeLay, Josef Gingold, Joseph Silverstein and Alexander Schneider.

Katz serves on the viola faculty and the orchestral performance programme faculty at Manhattan School of Music. He has previously taught at New York University and SUNY Purchase. Katz has given masterclasses at TON at Bard College and at North Carolina School of the Arts.

Fellow Israeli violist Tal First joins the MET Orchestra viola section as assistant principal. He has been a member of Daniel Barenboim’s West-Eastern Divan Orchestra, and worked as a substitute with the Sarasota Orchestra and the Princeton Symphony. First holds a bachelor’s and master’s degrees from the Juilliard School, where he studied with Li Lin and Itzhak Perlman.

First is on the roster of the NYC based CiM, Concerts in Motion, which gives him the opportunity to play for audiences that cannot attend standard concert halls.