The violinist married Larisa Martinez, his partner of 7 years, at their home in New York 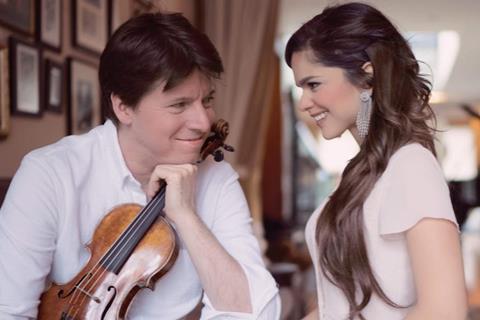 Joshua Bell, 51, married soprano Larisa Martinez, 32, at their home in Mount Kisco, New York, on Saturday 5th October. The officiating minister was David Brooks, a friend of the couple and a New York Times columnist based in Washington.

Bell, who performs as a soloist, chamber musician, recording artist and conductor, has made more than 40 recordings, winning numerous awards.  Since 2011 he has served as Music Director of the The Academy of St Martin in the Fields.

Martínez, who has a masters degree in music from Mannes the New School for Music in New York City, is a winner of the Angel Ramos Foundation Award and the Metropolitan Opera National Council Audition PR district 2016.  A frequent recital partner of the Italian opera singer Andrea Bocelli, she has performed at the Hollywood Bowl, the Kennedy Center and Madison Square Garden. She has also collaborated with Joshua Bell on Medici TV’s Christmas Special, Joshua Bell and Friends.

The couple, who met backstage at the Blue Note jazz club in New York after a performance by their mutual friend, trumpeter Chris Botti, have been together for seven years.