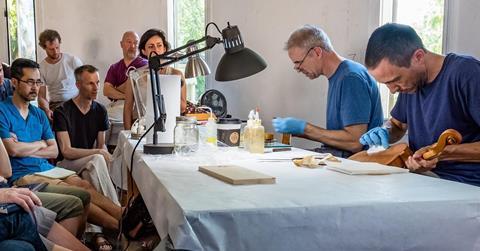 The Chicago School of Violin Making (CSVM) has announced that luthier Jeff Phillips is to join its staff as associate director. The Utah-based violin maker is one of the most garlanded in the US, having been named Hors Concours at the Violin Society of America’s International Makers Competition. The honour is reserved for makers who have received gold medals for their instruments in three separate competitions.

Phillips has given frequent masterclasses in lutherie, and is a regular at the annual Violin Makers Workshops at Oberlin, OH, where he and CSVM executive director Antoine Nédélec give demonstrations on antiquing instruments. The pair have written on the subject in the pages of The Strad.

Originally studying fine arts at university, Phillips entered the Violin Making School of America in Salt Lake City in 1999. He then spent seven years at the Utah workshop of luthier Peter Prier. He is still based in the city, where he also plays first violin in the Salt Lake Symphony.