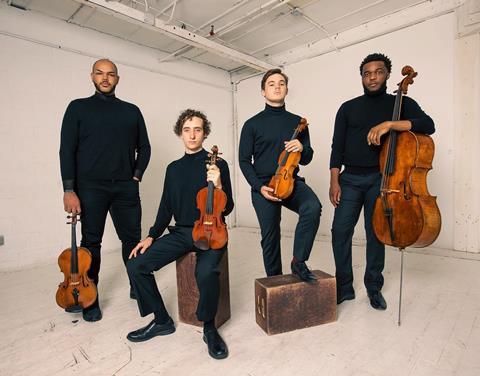 Fresh from its victory at the 14th Banff International String Quartet Competition, the Isidore Quartet has signed with David Rowe Artists. The ensemble joins the roster for general management and all bookings in the US and Canada.

’We are tremendously excited for the future as we embark on this new chapter in our career,’ the quartet said on social media.

The quartet looks forward to a busy schedule following its win at Banff, which brings extensive tours of North America and Europe, a two-year appointment as the Peak Fellowship ensemble-in-residance at Southern Methodist University in Dallas, performances at Haydn Hall in Eisenstadt and the Lucerne Festival,  plus a two-week residency at Banff Centre including a professionally produced recording, along with extensive ongoing coaching, career guidance, and mentorship.

Comprising violinists Adrian Steele and Phoenix Avalon, violist Devin Moore, and cellist Joshua McClendon, the quartet began as an ensemble at the Juilliard School, and following a break during the global pandemic reconvened at the Kneisel Hall Chamber Music Festival in the summer of 2021 under the tutelage of Joel Krosnick.  In addition to Krosnick, the quartet has coached with Joseph Lin, Astrid Schween, Laurie Smukler, Joseph Kalichstein, Roger Tapping, Timothy Eddy, Donald Weilerstein, Atar Arad, Robert McDonald, Christoph Richter, Miriam Fried, and Paul Biss, while performing in venues such as Alice Tully Hall, the Kennedy Center, and at the Ravinia Festival.

Highlights for the quartet’s 2022-23 season include an appearance at the Kennedy Center as part of the Fortas Chamber Music Concert Series, as well as its New York City debut with the Schneider Concerts at the Mannes School of Music.  The quartet will also be working as a resident ensemble with PROJECT: MUSIC HEALS US providing encouragement, education and healing to marginalized communities - including elderly, disabled, rehabilitating, incarcerated, and homeless populations - who otherwise have limited access to high-quality live music performance.