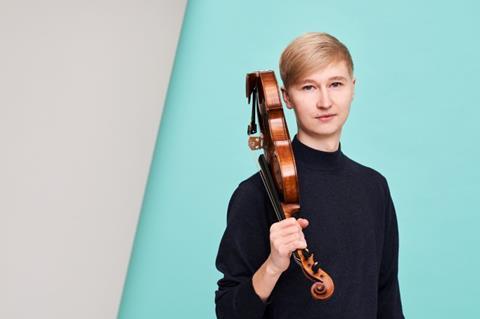 Fresh from his victory at the Carl Nielsen Competition in Odense in April, 23-year-old violinist Hans Christian Aavik has been announced as winner of the Usedom Music Prize.

The prize includes €5000, financed by the Oscar and Vera Ritter Foundation, as well as a concert on the island of Usedom as part of the Usedome Music Festival. The award ceremony will take place on 28 September as part of a concert in the seaside resort of Karlshagen.

Aavik studied at the Tallinn Music High School, the Frankfurt University of Music and Performing Arts with Erik Schumann and the Musik und Kunst Privatuniversität der Stadt Wien, where he studies with Julian Rachlin. In addition to joint-first prize at the Carl Nielsen Competition, Aavik is also winner of the Làszlò Spezaferri International Music Competition, the Eduard Tubin Estonian String Players Competition and the Kloster Schöntal International Violin Competition, where he won second prize and a special prize.

Aavik has appeared as a soloist with the Stuttgart Chamber Orchestra, the Estonian National Symphony Orchestra and the Jyväskylä Sinfonia. He released his debut album Aeternus on Pilw Records in 2021.

He currently plays on a Giovanni Paolo Maggini violin (ca.1610) and a bow made by Victor Fétique (ca.1930) on loan from the Estonian Instrument Foundation and the Sapožnin family.

Held on the Baltic sea island of Usedom on the border of Germany and Poland, the Usedom Music Festival commences on 17 September and runs until 8 October. With an Estonian focus for the festival’s 29th edition, Aavik will present works by the Estonian composers Eduard Tubin, Eduard Oja and Heino Eller as well as Richard Strauss, with his piano partner Karolina Zhukova.