A surprise ending to a competition that required the violin finalists to perform three concertos, including the challenging Nielsen Violin Concerto in the final round 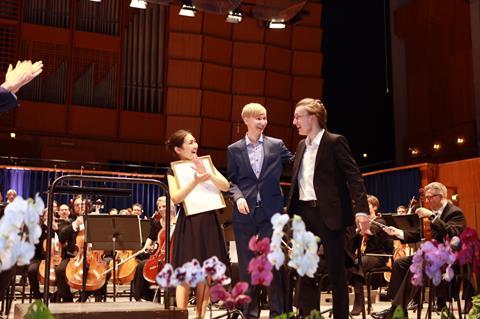 The prize winners for the Carl Nielsen International Competition were announced last night in Odense, with a surprise joint first prize for the violin discipline.

Hans Christian Aavik and Bohdan Luts were both awarded first prize by the violin jury, chaired by Noah Bendix-Balgley. While prize money is yet to be decided, the two will both enjoy the opportunity to record an album with Orchid Classics, perform solo engagements with Nordic orchestras, as well as receive a bow from maker Duncan Emck, donated by Ulf Eriksson Violiner.

Third prize went to Eun Che Kim, who received €7500. Aavik also won the prize for best interpretation of the contemporary piece Maze for solo violin, written by Jesper Koch, as well as the Odense Symphony Orchestra prize, both of which are worth €1000. Luts was awarded the young jury prize of €1000.

The prizes were awarded shortly after the violin finals held earlier that day, where each finalist performed the Nielsen Violin Concerto with the Odense Symphony Orchestra, conducted by Daniela Musca.

Competition president and winner of the Carl Nielsen International Competition in 1992, violinist Nikolaj Szeps-Znaider said, ’This competition has exceeded all our expectations in many ways. First and fore-most for the fact that we have four outstanding first prize winners of exceptional musicality and individuality, as well as the overall high level of music making which we have heard from the many participants over the last ten days.

Emphasising the importance of Espansiva! - the programme of professional development and mentorship that ran alongside the competition for contestants, he said, ’Equally important has been the extraordinary sense of “togetherness” which we have seen and felt amongst the competitors – young musicians who have shown genuine warmth and support for each other both on and off-stage.

’The Carl Nielsen values of excellence, curiosity, individuality and community are the essence of what we strive to achieve in this competition and it is clear that Odense creates that special environment for young musicians to flourish. We wish every participant the very best for the future.’

23-year-old Estonian violinist Aavik studied at the Tallinn Music High School, the Frankfurt University of Music and Performing Arts under Erik Schumann and at the Musik und Kunst Privatuniversität der Stadt Wien where he studies with Julian Rachlin. He has appeared as a soloist with the Stuttgart Chamber Orchestra and the Estonian National Symphony Orchestra and the Jyväskylä Sinfonia and released his debut CD in 2021 on Pilw Records.

17-year-old Ukrainian violinist Luts studied at the Krushelnytska Music School in Lviv, the Lysenko Music School in Kiev and the International Menuhin Music Academy. His teachers have included Oleg Kaskiv, Renaud Capuçon, Olga Korinets, Yaroslava Kataryna and Maria Futorska. He has played with the Lviv National Symphony Orchestra and the INSO Orchestra and has participated in the Gstaad Menuhin Festival and the Bellerive Music Festival as well as giving recitals in Ukraine, Switzerland and Italy. 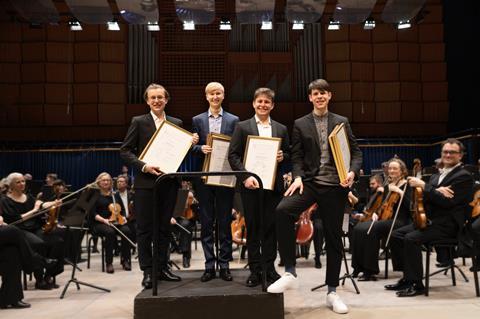