A Celebration of Aldeburgh Festivals runs from 12 June 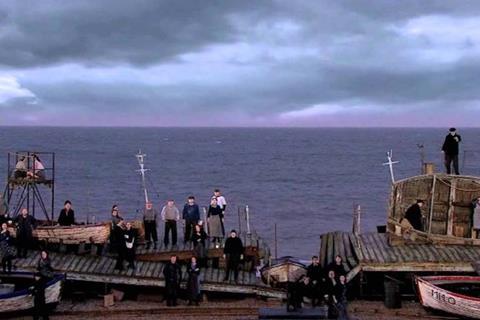 Grimes on the Beach was one of the highlights of the 2013 Aldeburgh Festival, celebrating Britten’s centenary year

In place of the 73rd Aldeburgh Festival, which has been cancelled due to the coronavirus pandemic, Britten Pears Arts presents a 16-day celebration of the festival’s programming over more than 70 years.

Running from 12 – 28 June 2020, when the 73rd Aldeburgh Festival would have taken place, a Celebration of Aldeburgh Festivals launches with an ‘opening night’ broadcast of Britten on Camera, a documentary originally commissioned for Britten’s centenary in 2013,  exploring the relationship Britten developed with the BBC to bring classical music to wider audiences. Taking place at 7.30pm on BBC Four on Friday 12 June, it features contributions from David Attenborough, Michael Crawford, Humphrey Burton and Nicholas Kenyon. It is followed, the same night, by Struan Leslie’s Illuminations – a staging including circus performers of Britten’s Les Illuminations - on Britten Pears Arts’ YouTube Channel

Further highlights of ‘A Celebration of Aldeburgh Festivals’ are below:

In 2013 as part of Britten’s centenary celebrations, Aldeburgh Festival presented an open-air staging of Britten’s Peter Grimes on the very beach that inspired the opera, set against the backdrop of the North Sea. The cast was led by Alan Oke in the title role and Giselle Allen as Ellen Orford. Steuart Bedford conducted the Britten-Pears Orchestra and the Choruses of Opera North and Guildhall School of Music & Drama. It  will be available on BBC iPlayer later this month.

This event took place in 2014 when Aldeburgh Festival presented a version of John Cage’s Musicircus which took over the town of Aldeburgh for two hours. Cage’s concept was to invite anyone to perform anything they want to at the same time. Cage famously said, ‘You won’t hear anything: you’ll hear everything’. The Aldeburgh Festival performance featured around 1,000 performers, from artists and ensembles featured in the Festival to local bands and community music groups – the largest ever gathering of musicians in Aldeburgh with performances all over the town. Audiences can now create and mix their own Musicircus with an interactive digital experience based on the 40 performances that were filmed. This web app will be available at https://musicircus.brittenpearsarts.org from 12 June.

Read: 5 festivals that hope to go ahead this summer (at least in part)

BBC Radio 3 has been broadcasting from the Aldeburgh Festival for more than 50 years, and delves into the archive to broadcast six memorable concerts from the last decade.

John Wilson conducts the BBC Scottish Symphony Orchestra in a concert from 2018 which explored Britten’s wartime experience of America, the relationships that took him there and echoes of home. The programme features the first performance of Colin Matthews’ orchestration of Britten’s Seven Sonnets of Michelangelo with tenor Robert Murray, Britten’s Sinfonia da Requiem, Copland’s Quiet City and Bernstein’s Symphony No. 2 The Age of Anxiety with pianist Cédric Tiberghien (19 June, 7.30pm, BBC Radio 3 in Concert).

In 2018 Cédric Tiberghien and the period strings of the Chiaroscuro Quartet explored chamber music by German romantic greats with a programme including Schumann’s Fantasy Op. 17 and his Piano Quintet alongside Mendelssohn’s String Quartet Op. 12. (24 June, 7.30pm, Radio 3 in Concert).

Oliver Knussen had a long-standing relationship with both the Aldeburgh Festival and the BBC Symphony Orchestra. This performance was Knussen’s final concert. One of Knussen’s typical programmes, it features the world premiere of Philip Cashian’s The Book of Ingenious Devices, a piano concerto in a single movement performed by Huw Watkins, Morton Feldman’s Structures and music by Aaron Copland - Music for a Great City, and the Appalachian Spring Suite (26 June, 7.30pm, BBC Radio 3 in Concert).

Britten Pears Arts is now collecting people’s memories of as many of the 72 Festivals as possible, inviting anyone who has a story to tell about a Festival visit to post their memories, using this online form. A timeline documenting the memories will be displayed at brittenpearsarts.org throughout the Festival.

There will also be podcasts, articles and social media projects (including an ’On This Day’ feature) giving insights into the breadth and quality of the Festival over the years.