Sticky stuff: how rosin is made and how to choose the right one for your needs

As string players we all use rosin, but how many of us understand its properties well enough to choose the type that’s right for us? Laurinel Owen investigates 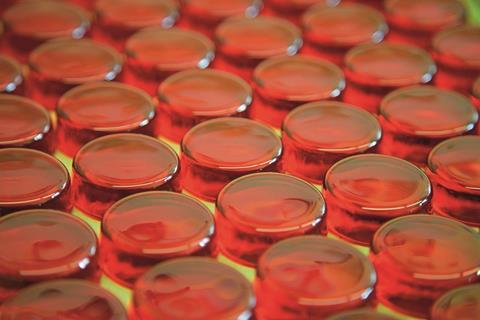 What is the first thing you do when you get your bow back from a rehair? Ever tried playing without first applying rosin? Nothing, nada, zilch. Even a beginner as young as four is taught to rosin the bow. We all carry a little cake of the stuff in our cases but perhaps have scant idea about what it is and how it works. If we don’t care and only want to find the ‘best’ one, even a cursory look online reveals an overwhelming choice: student, professional, dark, light, shocking pink (!), violin/viola, cello, bass, viola d’amore, synthetic, in a box, on a cloth, gold, silver, meteor iron and so on. Help! Check out prices and step deeper into the quagmire: 68 pence (free shipping?) to one hundred times more. Let’s hear what the experts have to say.

An alternative word for rosin, ‘colophony’, comes from the name of an ancient city, Colophon, in Asia Minor near Ephesus (now present-day Turkey). It can also be known as ‘Greek pitch’ and comes in three varieties: ‘gum’, which is harvested from living pine trees; ‘wood’, from pine stumps; and ‘tall oil’, a by-product of paper pulp production. Apart from its use on instrument bows, rosin is a common ingredient found in inks, paper, varnishes, glues, soap, cosmetics and myriad other products, and is a common allergen. Its frictional properties play an important role in adding grip to the shoes of ballet, flamenco and Irish dancers, fencers, gymnasts, acrobats, baseball pitchers and even bull riders needing extra contact with the rope. 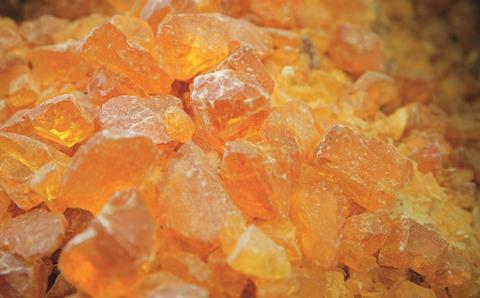 Raw rosin at the Pirastro factory

Pine sap (resin) is collected in a manner similar to the methods used in New England for harvesting maple syrup. A machete, hatchet or axe is used to score the bark of the tree and a collection bucket is positioned under the exposed sapwood for the resin to drain into. The raw ingredient is then heated to boiling to distil out the turpentine, then heated and cleaned further to separate out the solids. This produces a pure substance that when cooled becomes hard and brittle at room temperature.

Fifty years ago, the largest tree plantations in the world were in the south-east United States, but because the process of collecting the resin became so labour-intensive, countries such as China and those in South and Central America have become bigger players. Traditionally, in Europe the larch tree was used, whereas in the US it was pinus elliottii, known as ‘slash pine’ because it grows so quickly.

It is possible to use pure refined rosin on our bows, but producers and players have found that with the addition of other ingredients, both the playability and sound quality are improved, as is the ease of application. However, each producer guards their ‘secret’ recipe. 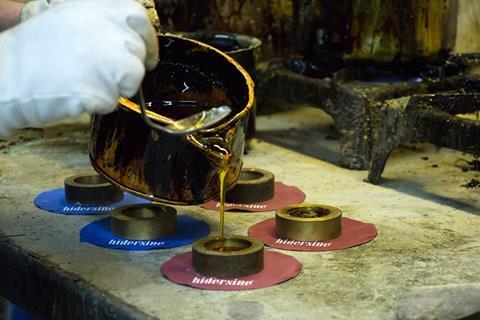 Hidersine rosin being poured into moulds

HOW DOES ROSIN WORK?

As children we were taught how to rosin our bows: scrape the cake up and down the ribbon of hair. In our enthusiasm (and possibly to avoid spending time practising our scales) we rub the hair: ‘I’m practising, mum.’ When the bow finally touches the string, dust flies, caking the strings and varnish. We are oblivious to how the rosin interacts with the string to activate the vibration.

‘Rosin heats up quickly with friction, especially at room temperature and above,’ says Fan-Chia Tao, the R&D director at D’Addario in New York. We are standing in front of two heat-controlled electric kettles set at 140C where the firm’s Kaplan brand rosin is cooking. ‘The string sticks to the rosin, which sticks to the bow hair. The contact at the beginning of the stroke sets up the string vibration and we have a response known as Helmholtz motion.’ This is a stick-and-slip motion involving a spinning, twirling and snapping-back action produced by the ribbon of bow hair as it grabs, releases and re-grabs the string. The process is much too quick for our eyes to perceive, but has been documented with very high-speed video cameras that can then replay the footage at very slow speeds.

The thickness of the string and skill of the player will require various amounts of stickiness in the rosin. This is where our choice comes into play. Basically, less stickiness/grip for a thin-stringed violin or viola and greater stickiness for cello and bass – easy to say but not so easy to quantify. We’ll see that this is a subjective exercise.

The manufacturers of colophony rely on different sources for the pine sap, which is the predominant ingredient. In Dornach, Switzerland, Lothar Seitz makes the Larica brand colophony from the original German ‘Liebenzeller’ recipe. The raw sap that he imports from a tree farmer in Austria is milky-white, yellowish or even reddish. He doesn’t know why there is a difference in colour from one tree to another. The bigger producers acquire the resin from chemical companies, which come in chips or blocks already bleached and cooked to remove the particles and granules.

With a bit of prodding I am able to discover some of the extra ingredients that manufacturers add to the basic colophonia resina: a variety of waxes, calcium and specialist oils. Several products include metals such as gold, silver, copper, tin and even meteorite dust. 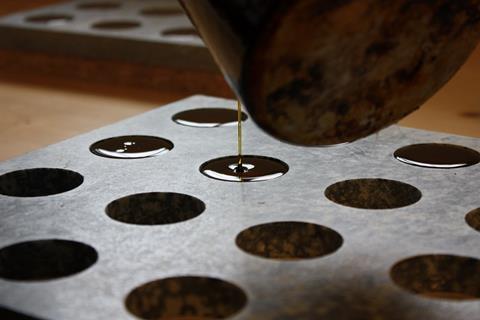 HOW IS ROSIN MADE?

Barnes & Mullins, based in Shropshire, UK, manufactures Hidersine, Birch’s ‘AB’ and W.E. Hill & Sons rosins. Joint managing director Bruce Perrin describes how he learnt the craft at the start of his career:

‘It was my job to travel every day from central London down to Shirley in south London to learn the art of transforming resin into rosin. At the time, the whole process was clouded with mystery and intrigue. I discovered that one man, “Jock” Smith, a rather scary Scotsman, was the tutor working in what was no bigger than a small garage – a very confined place that got smokier and smokier as the morning went on.

‘My first job each day would be to mix the required ingredients in a big copper urn, which I’d place on a gas-fired ring and carefully bring the contents up to the optimum temperature. While this was heating I would lay the rosin cloths on a big marble table, then position brass moulds in the centre of each cloth. [The reason for the marble table and brass moulds is to dissipate heat quickly.] The moulds were tapered so they were easy to remove once cooled, but had to be kept very clean. By the time this process was complete, the rosin was at the required temperature.

‘From the big urn I poured the rosin into a copper jug and from there parcelled the molten liquid evenly into the moulds, producing a dozen at a time. After each twelve, I “flamed” over the surface of each mould to remove any air bubbles, which left the top of each rosin block perfectly smooth. By the time the last mould was filled, the rosin at the beginning of the series had set and could be removed from the marble table ready to box. Then I’d begin the cycle all over again for the entire day. I must say it was very therapeutic!’

Wolfgang Weiss, director of sales at Thomastik-Infeld, speaks to me from Vienna where the company makes 14 different types of rosin. ‘Each rosin reflects different grades of stickiness, which depend on the properties of each tree and our other oils and additives. Stickier, softer rosin has a slower response and more bow noise than harder rosin. In a very dry climate the player may need more grip than in a humid environment. Moisture and high temperature make rosin sticky. Also, the musician’s playing style will determine the preference.’ 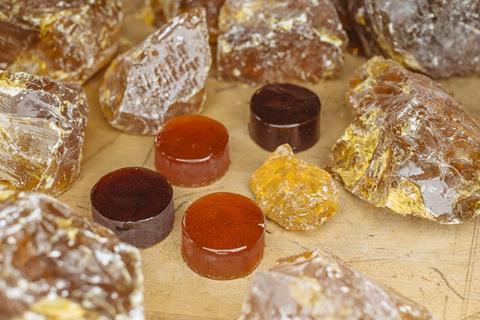 ‘Some players use lighter rosin in summer or more humid climates, and dark rosin in winter,’ reports Rachel Drehmann, who prepares the rosin for Salchow & Sons bow makers in New York City. ‘It is up to the player to experiment with what works best. William Salchow started making rosin more than 50 years ago and we’ve kept the recipe the same. Our rosin is a home-made product; we keep it simple and make it to order. When weighing in, I can say that we sell more dark than light.’

The German string company Pirastro markets twelve rosins. ‘Each product was developed to match our strings,’ says technical director Adrian Müller. ‘The central question is whether you like hard or soft. Colour does not come into it.’

D’Addario’s Fan-Chia Tao concurs: ‘You can’t rely on colour. Colour is basically psychological. It is like saying that all red cars go faster. This is not an indication of grip. Players often think that sticky is better. Yes, at the beginning of the stroke. However, sticky does not give you as large a tonal palette. You lose nuance. Beginners need sticky, but advanced players should be able to control the bow with a finer grade.’

What about the cloud of dust, almost like smoke, that rises from a newly rosined bow? Bruce Perrin claims: ‘The amount of dust will depend on the quality of the bow hair; coarse hair will produce more dust. Applying too much rosin will clog the natural barbs of the bow hair and cause the rosin to drop from the hair on to the instrument.’ The overall advice appears to be: don’t use too much. Less is more.

There seems to be controversy concerning the topic of metal added to rosin. As one would expect, those producers who add gold claim that the tone will be more balanced, full, harmonious, round, warm, large, bright and clear and that metal allows better contact between the rosin and the string. The others say that metal could be detrimental to the strings and bow hair. ‘Smoke and mirrors’ is one comment I hear.

With the dozens (or hundreds) of rosins on the market, how are we to choose? ‘Players must consider carefully what sound and response characteristics they wish to enhance, rather than simply looking for something that might just be a welcome change from their current rosin,’ says Andrew Baker of Australian firm Leatherwood Bespoke Rosin. ‘And in response, rosin makers should be able to qualify and communicate clearly the specific sound and response characteristics their rosins provide.’

Price is not an accurate guide to quality, because much of the cost can be in the packaging and advertising. I have several rosins that are housed in beautiful olivewood boxes and even violin-shaped wooden boxes with the lids held in place with magnets. They look beautiful and the rosin is excellent, but I know I paid mostly for the box.

I’ve played the cello for decades, yet in researching this article, this old dog learnt a couple of new tricks. ‘In very cold and very hot climates,’ comments Perrin, ‘it is important to protect the rosin from extremes of temperature. When not being used it is advisable to keep the rosin in the instrument case.’

And Pirastro’s Müller caps our discussion with these final words: ‘After two years or so, rosin gets hard and brittle. It’ll crack and won’t have the same characteristics as when it’s new. The chemical composition changes. We’ve been asked to stamp due dates on our rosin, but it just isn’t practical.’

On that note, I’m going to throw away my old cake and start shopping.