As Nazrin Rashidova continues her recorded exploration of Sauret’s Études-Caprices played on his own Stradivari, she contemplates an unusual technical challenge 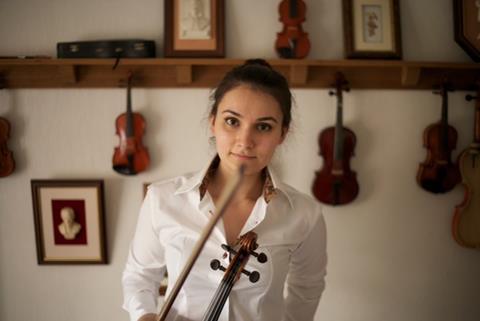 ‘Notes central and velvety of medium or large power, scrupulous staccato, and unobtrusive legato, and the whole perfect; a classical ideal if ever there was one!’
From ‘Émile Sauret and his violins’, The Strad, 1926

Émile Sauret acquired what Carl Flesch described as a ‘stupendous technique’ and George Bernard Shaw characterised as an ‘extraordinary command of the violin’ which is today perhaps easiest to perceive through his pedagogical literature.

As a pedagogue, Sauret’s eminence induced many violinists to study in London in the early years of the 20th century and his extensive compositional output similarly drew favourable attention. Comprising over 250 works, including three concerti, a substantial number of salon works, arrangements, transcriptions, editions, cadenzas, a Gradus ad Parnassum du violoniste, op.36 and three major collections of technical studies (20 Grandes Études, Op. 24, 12 Études artistiques, Op. 38 and 24 Études-Caprices, Op.64), this vast output adds a particular colour and impression to our perception of Sauret’s technical and expressive range as a performer, pedagogue and composer, which in turn suggests to me that there are elements of self-portrait in his last major virtuosic work, the 24 Études-Caprices.

In these very demanding etudes we see, perhaps surprisingly, Sauret’s special fondness for ‘moderation’: the majority of these pieces have a moderato indication in one form or another. The 24 Caprices of Niccolo Paganini (1802-17), Jakob Dont (1849) and Pierre Gaviniès’ Matinées (1874) use this marking sparingly (it appears only twice in each of those sets). It appears more frequently (six times) in Pierre Rode’s 24 Caprices (1814-19) but it seems that Sauret may have an older model of virtuosity in mind.

The Allegro in Étude-Caprice No.17 erupts in a shower of semiquavers in a bowing pattern reminiscent of the saccade – a version of a syncopated staccato the 19th-century violinist Pierre Baillot defines in his treatise L’Art du Violin referring to examples of the bow stroke in Viotti’s Concerto No.24, Rode’s Concerto No.4 and Kreutzer’s Etude No.2. 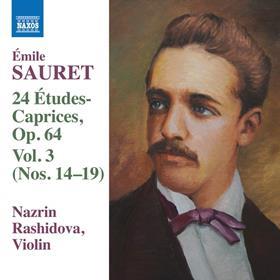 This bow stroke appears momentarily in those concerti, and mainly on one string, rarely passing beyond a two string range. Here, Sauret stretches it to its limits, extending the pattern over long periods and travelling across all four strings in arpeggiations, complicating the already asymmetric nature of the bow stroke. In the learning process, I experimented working with differently weighted bows (as well as a cello bow) to try and achieve a sense of regularity and balance in the elbow level while tackling the wild string crossings.

Nazrin Rashidova is currently pursuing a PhD at the Royal Academy of Music where her research explores Émile Sauret and his 24 Études-Caprices. She woud like to thank the Worshipful Company of Musicians for their kind support towards the third volume of the recording series, and John Ludlow for the loan of the ‘Sauret’ Stradivari