Behind the scenes at the music and wine festival

Burgundy’s Musique & Vin festival has quickly grown from its humble origins to encompass a rich diversity of elements, not least first-rate performances from international artists and an instrument loan scheme for young musicians. Charlotte Gardner spoke to those involved in this unique project 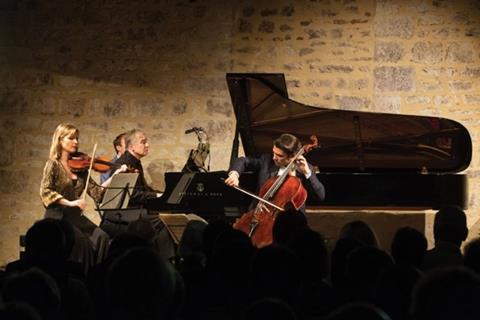 The following extract is taken from The Strad’s October 2019 issue. To subscribe and read the full article, click here. To order the print edition, click here

Perhaps you’re familiar with the scenario in which a photo you’ve taken with maximum haste and minimum thought – a rapid ‘just in case’ shot before swiftly re-pocketing your phone – ends up becoming the one image that truly gets to the heart of the experience, as opposed to the many photos you’ve taken that were carefully composed.

This is what happened to me this year after attending Burgundy’s music and wine-tasting festival, Musique & Vin au Clos Vougeot. Although I returned home with any number of beautiful images from the eight concerts on offer over the nine-day period in June (major musicians such as cellist Gautier Capuçon and violinist Lisa Batiashvili on stage in characterful wine cellars; vineyards at sunset; exquisite medieval architecture), the photo I keep returning to instead is one hastily snapped in an office two months before the festival even began, during a dinner for festival sponsors at Beaune’s private wine-tasting club, 1243 Bourgogne Society, when on the spur of the moment a handful of us sneaked out between courses.

Closest to the camera is violinist David Chan, concertmaster of the New York Metropolitan Opera Orchestra and the festival’s artistic director, and under his chin is the focus of our mid-dinner exodus: a beautiful copy of a ‘del Gesù’ violin made for the festival by Stefan-Peter Greiner and newly returned after some restoration work.

Smiling close by as Chan draws an exploring bow over its strings is the violin’s commissioner, Daniel Weissmann, festival general secretary and director of the Liège Royal Philharmonic Orchestra. As for the state of the room itself – it’s organised chaos, floor and furniture alike scattered with a combination of wine-glass boxes and serious-looking instrument cases.

This is because the following morning 25 young string players of assorted nationalities would be arriving to audition for the loan of either this Greiner or of one of the festival’s other fine modern copies of old Italian instruments. This isn’t all the festival is doing for young artists, because if you turned up in June you’d also have heard performances from the festival’s two annual recipients of its ‘Young Talents’ career bursaries of €10,000 each, which can be spent in whichever way the recipient (again, of any nationality) chooses.