What do wine and violins have in common?

What can we learn about violin experiments from wine connoisseurs? Ariane Todes fills her glass in the name of research 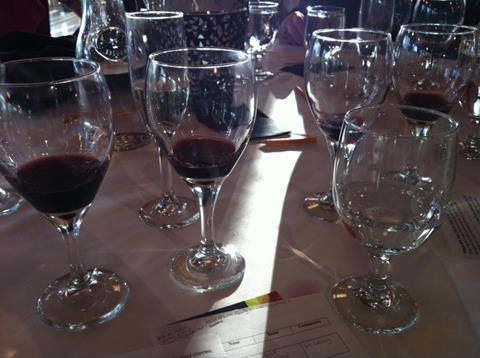 I’ve taken part in a few violin blind tests in my time, but yesterday evening I experienced my first wine one, as part of the La Musica chamber music festival in Sarasota, Florida. It was billed as an Old World, New World exploration, with six wines in pairs of Old World and New World. We were told in advance what we were drinking, so it wasn’t strictly speaking a test, more of a learning curve. However inevitably it brought up obvious and interesting parallels with violin comparisons.

We were given a grid with four columns to mark – appearance, nose, taste and comments – and were poured one wine at a time, but kept two on the go so we could compare the equivalent wines.

First, colour. I look, I hold up to the light, I stare. It’s red. Deep red, maybe. Like Ribena. Then nose. I swirl, I stick my snoot in, like I’ve seen being done. I write down ‘redcurrant’ for nose, and for taste, ‘cough pastilles’.  They pour the next one, and it looks exactly the same. I taste it and the only word I can think of is ‘metal’.

Then I read the given description for the first: ‘This wine is brimming with notes of dark, dried cherries, blackberries and hints of dates and mocha.’ For the second one, ‘This wraps dark, steeped plum and blackcurrant fruit with notes of mint, sage and tobacco, before finishing with a melted licorice edge. A solid and gutsy style.’ Now with these words in front of me, I try to detect such elements, but fail. I go from one to the other, holding both glasses in my hands trying to compare directly – sight, smell, taste. I’m still at a complete loss. But getting pleasantly warm and giddy.

What’s happening here? First of all, my complete inexperience with wine connoisseurship means the brain connections that are supposed to help detect, analyse and categorise just do not exist and I’m left with very crude perceptions. Then, the connections with language and the specific vocabulary associated with these perceptions are absent and I’m left feeling completely inarticulate. Let alone being able to analyse the differences between Old World and New World.

And so it goes with six wines, my attempts becoming weaker and weaker, my cares fewer and fewer. At the end we are asked to choose the one we like the most and I go with a 2010 Italian Primitivo from the Li Veli vinery in Apulia. I’m not entirely sure why, it just seems to have the most body and interesting layers and I am bored with having to try so hard. I wouldn’t be able to say anything about ‘notes’ or ‘aromas’ or ‘finish’, but I liked it. Afterwards we are given the price list and it turns out this wine costs $10.95, against its Californian equivalent’s price tag of $39.95.

What does this all say about violin blind tests? Well, it raises similar questions. Firstly, who should be taking part in blind tests – ignoramuses like me, or people who know something? Is my $10.95 choice valid? Is a general audience member’s choice of a modern instrument over a Strad valid?

Then there is the subtext of whether people can tell the difference between Old and New World wines, and which they prefer. I chose an Old World wine at the end, but had no way of distinguishing within the pairs. In a notorious 1976 wine blind test Californian wines trounced the old French ones, so maybe even experts can’t (Alan Coggins wrote about this for us in our February 2007 issue).

There are also questions about the limitations of language. How do we know that my sense of ‘lime blossom’, ‘wet stone’ or ‘toasty oak’ is the same as yours? I’ve been asked to describe sounds in violin blind tests, and isn’t it the same issue?

And then there are questions about price ranges – most of the wines we tried, apart from the $39 one, were in the range $10–$20. Violin blind tests tend to focus on the high end, but it might be interesting to do some at a more modest price level.

Ultimately, I chose my wine on the basis of a gut reaction that went beyond analysis or language, my only criterion being, ‘What do I want to drink a full glass of now?’ And maybe that’s how it should be.

So – lots of questions, and maybe only one solution: I should drink more, better wine.