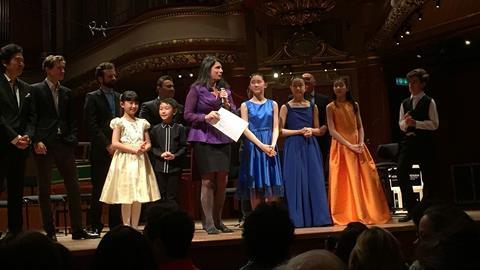 For the first time in its history, the Menuhin Competition Junior Division first prize has been shared - by 11-year-old Chloe Chua and 10-year-old Christian Li - following a Final held at Geneva’s Victoria Hall this evening.

Six Finalists, whittled down from 22 competitors aged between 10 and 15 over two previous live rounds, directed the L’Orchestre de Chambre de Genève from the violin in one of Vivaldi’s Four Seasons, and also performed the world premiere of the new commission for solo violin by Jaehyuck Choi.

Chua from Singapore and Li from Australia (also the contest’s youngest ever finalist) each receive a first prize of CHF 10,000, plus the one-year loan of a fine old Italian violin by Florian Leonhard Fine Violins.

The Senior Final takes place tomorrow evening, during which four finalists, aged between 17 and 20, will perform a concerto in Victoria Hall with the Royal Philharmonic Orchestra conducted by Julian Rachlin.

The Menuhin Competition 2016 Senior Division was won by Ziyu He, while Yesong Sophie Lee triumphed in the Junior Division.