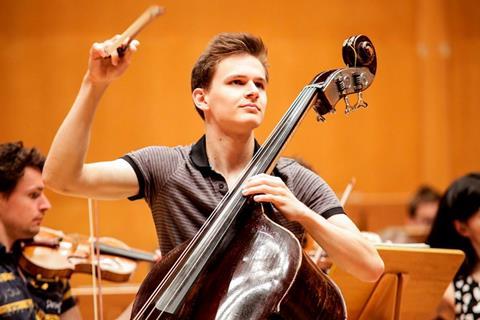 As well as the $10,000 cash prize, sponsored by Solano Basses, Wagner also won a David Herman baroque bow and a four-year package of career development benefits, including a New York debut recital in the Weill Recital Hall at Carnegie Hall, a CD recording including distribution, and a series of concerts and master classes.

Wagner was born in Vienna in 1997 and began cello lessons at the age of five, before switching to double bass. He studied with Josef Niederhammer and Werner Fleischmann at Vienna’s University of Music and Performing Arts and currently with Dorin Marc at the Hochschule für Musik, Nürnberg.

He won a 2017 ECHO Klassik Award in the newcomer category for his album Gassenhauer with clarinettist Vera Karner, itself the result of a win at the 2016 Mendelssohn Förderpreis. He has also placed highly at the ARD Competition, the Eurovision Young Musicians Competition and many others. He holds an Anne Sophie Mutter Foundation scholarship.

The Bradetich Foundation, which inaugurated the competition in 2010, was founded by American bass soloist Jeff Bradetich, ‘with the sole purpose of advancing the performing, teaching and knowledge of the double bass’.