Jean-Luc Ponty: 'Nothing was too intricate for me because I had that solid technical background'

The French violinist, who celebrated his 75th birthday last year, is a trailblazing figure in the world of jazz. Yet his grounding in classical technique was important in shaping his musical approach, he tells Toby Deller 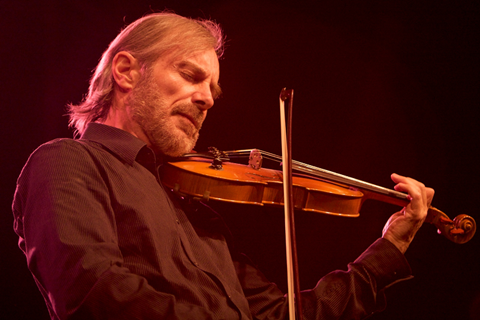 Jean-Luc Ponty at the Nice Jazz Festival in 2008

The following is an extract of a longer interview with Jean-Luc Ponty in The Strad’s February 2018 issue. To read further, download now on desktop computer or via the The Strad App, or buy the print edition

‘As much as I admired Grappelli, once I discovered modern jazz it appealed a lot more to me than gypsy jazz because the modern harmonies are closer to Debussy and Ravel,’ says Ponty.

A hostage of neither the tradition of classical violin nor the more recently popularised style of Grappelli, Ponty followed his own ears. His classical training stood him in good stead, particularly, he says, his left hand. ‘It helped me to approach any type of music I wanted: nothing was too intricate for me because I had that solid technical background.’

Yet emulating the classical violin sound in his jazz playing was not an aspiration. ‘Sound is, of course, a very important concern for string players, but my approach was different from that of other jazz violinists, maybe because my early influences in jazz were sax players like John Coltrane. I was very impressed by that sound – straight, with no vibrato – just as I was by the trumpet sound of Miles Davis. So for me it was important to develop a full and intense tone. I must say that my teacher at the Paris Conservatoire, Gabriel Bouillon, had a different technical ethos from that of the other French teachers. He was more in favour of Russian bowing technique and taught us to achieve a powerful sound while just playing one long note. It’s about the pressure you put on the frog and the way you hold the bow, and to me it seemed the perfect approach to playing modern jazz.’

Adapting his bowing to the rhythmic demands of jazz, though, was something Ponty had to learn on the job – first in the active Paris club scene and then, as his talents gained recognition, further afield. ‘At the very beginning I might have been a little bit too regular and stiff, coming from Bach and playing so much Baroque repertoire. Trumpet player Dizzy Gillespie, when he heard me in America for the first time – I was maybe 24, 25 – said that I was playing great but that it would help me to play country music. He was such a joker that I thought it was just another joke, because I was not at all into country music. It was only after I moved to America in 1973 and saw the country fiddler Doug Kershaw that I understood what he meant.’

To read the full interview with Jean-Luc Ponty in The Strad’s February 2018 issue, download now on desktop computer or via the The Strad App, or buy the print edition