In this extract from an article in the May 1894 issue of The Strad, our correspondent Robin H Legge does not try to hide his adulation for the most celebrated violinist of the time 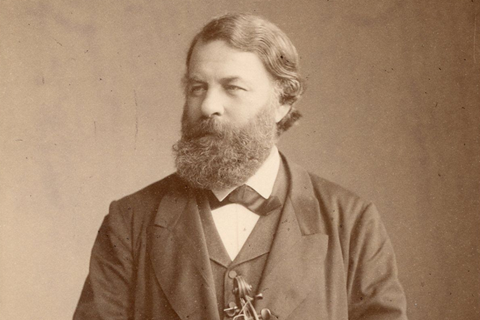 Joachim the man is said by one who has known him intimately for years to be a most delightful companion. Cultured in the highest degree, he is ever ready to enter into serious discussion about music, and artistic and philosophical subjects, upon all of which his utterance are of deep interest and well thought out.

He is a jovial and boon companion, the possessor of an inexhaustible store of anecdote upon which he is always ready to draw for his friends; but he has never been known to speak in any but the most generous terms of a brother artist. He is, of course, entirely free form all taint of professional ill-will or jealousy; and his sense of humour is most prominent.

He is a model of modesty, especially for so phenomenal an artist, and his willingness to please and to give pleasure to others by his playing are quite unbounded. He is a stranger to all sordidness in money matters connected with his profession, and it is said that he never accepts a fee for playing at a private house. 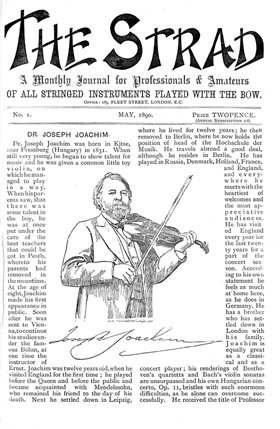 Joachim’s physical strength and power of endurance are as remarkable as the strength of his character. It may be said with truth that he does not know what fatigue is, and the following story fully bears this out. Joachim was to make his annual appearance at the Crystal Palace one day not many years ago, and he accordingly set out on the Saturday morning for Sydenham.

There he rehearsed from eleven till one: played in the concert at three: walked after the concert to Dulwich where he dined with friends, and after dinner led two quartets and played a number of solos. This over, he drove to town to attend a party at the German Embassy, where he again played, until the small hours of the morning. What say our ‘Eight-hours-a-day’ friends to that?

Joachim the artist, though more generally known than Joachim the man, is in no way less interesting; in his case, familiarity has bred anything but the proverbial contempt. But surely it is unnecessary to discuss Joachim the artist. He is known and beloved by the whole art-world; he stands (even now in his sixty-third year) unsurpassed, unequalled, unrivalled, as an artist.

Though upwards of sixty years have come and gone since Joachim first saw the light, we may reasonably hope to see him among us at his accustomed post at the Popular Concerts and elsewhere for many a long year.

Let us hope so, indeed, for take Joachim all in all, with his great accomplishments, his rare gifts, his genial and kindly manner, we of this generation can hardly expect to look upon his like again should he think fit to desert us.