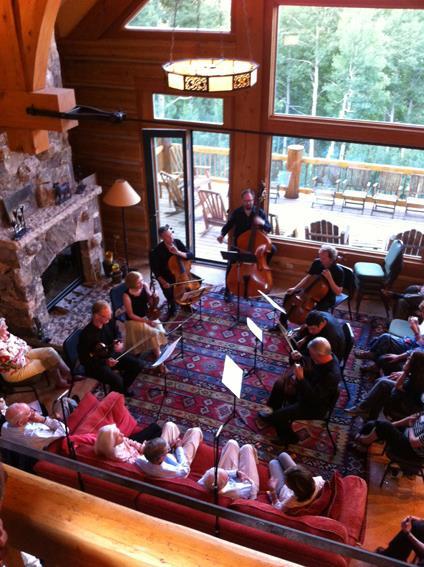 In the late 1970s the American String Quartet (ASQ) played some concerts with the Tokyo Quartet (TQ), and we gossiped, as colleagues will. After the major interpretive questions were discussed (for those who wonder: The Note Beethoven Did Not Write in op.131, and The Two Imaginary Bars in Mozart K465), equally vital matters arose: although we liked a lot of the same concert halls, the TQ knew more great restaurants.

At some point we felt emboldened to ask what they fought most about as a group. For them it wasn’t tempos, bowings or guest artists – it was how many weeks they could take off during the summer. (Remember that this was before summers had evolved into additional concert seasons.) I remember Koichiro Harada suggesting strongly – though not explicitly – that the measure of a quartet’s success was not the number of concerts or the size of the fees, but how long a break the players could take at the end of each regular season. At the time, the Juilliard and Guarneri quartets were said to take four to five weeks off, while the Amadeus was rumoured to afford itself seven. The ASQ was managing about three.

Fast forward to July 2013, when, after a three-week break, my colleagues and I converged on Crested Butte, Colorado, for our third summer there. The town and the festival are today what Aspen was 30 years ago: small, loosely organised, friendly – even funky in some regards. The artists and the board all know one another, the Bluegrass, opera, symphonic and chamber music each seem to attract with equal success, and you can look down any street in town and see the Rockies just beyond.

Succumb to their beckoning and you’ll find miles of stunning hikes – from strolls to arduous climbs – with almost no one on them. Wild flowers in a riot, wildlife still (justly) unused to human presence, and views from some of the ridges and passes to what seems like Tierra del Fuego. Put the exaggeration down to anoxia.

One of our friends on the board had heard a concert during the season in which we played the septet version of Richard Strauss’s Metamorphosen, and he gently but absolutely insisted that we play it in Crested Butte. Strauss originally scored the piece in 1945 as a septet, but when approached by Paul Sacher with a commission for a large string ensemble, he dropped the original score in a drawer and produced the 23-instrument version most often heard thereafter.

In the early 1990s, however, the drawer was opened, to the delight of chamber musicians everywhere. It’s hardly a summery work, but Strauss’s brooding on the apparently imminent end of German culture (he had just reread the complete works of Goethe before putting pen to paper) relies for its impact on his signature modulatory freedom and telling quotes from the funeral march in Beethoven’s ‘Eroica’ Symphony. For those who needed cheering up after the Strauss, we played Schubert’s deathless ‘Death and the Maiden’ Quartet.

Later in the week we offered another programme, which included Shostakovich’s Third Quartet and the Dvo?ák Piano Quintet no.2 with Alexander Schimpf, a fine young German pianist. We have long championed Shostakovich’s no.3 as an alternative to no.8 – both are massively powerful expressions, but no.8 has been played to the point where many audiences are tempted to sing along with the D–S–C–H motifs. You may guess our rather similar feelings about a certain Dvo?ák quartet.

One of the elements of summer festivals that offers risk and reward in equal measure is guest artists. The music director in Crested Butte, Alexander Scheirle, is both a friend and a fine cellist, and given his knowledge of the ASQ there was little trepidation when we first sat down to rehearse with Alexander Schimpf. Indeed, when we finished the first movement that day, I turned to him to ask: ‘When did we last play this together?’ There is an axiom about first-time collaborations: either two rehearsals will be enough, or twelve will be too few. To the relief of all concerned, the former applied.