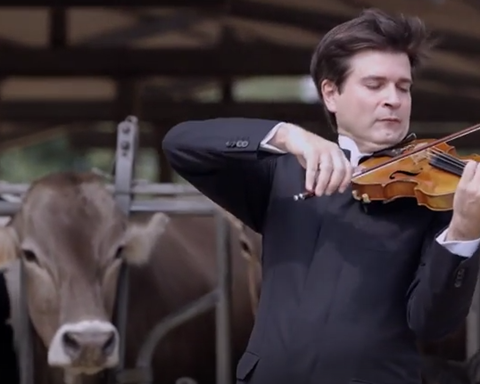 Usually I refuse to play in front of an audience that eats while listening, but I can make an exception for cows. Especially because they do not speak during a concert'

As the countdown begins to this year's Cremona Mondomusica trade fair in Cremona, Italy (September 25-27, 2015), CremonaFiere has organised a concert celebrating two of the region's greatest exports - fine stringed instruments by the likes of Stradivarius and Guarneri del Gesù, and its celebrated dairy industry.

Back in 2001, researchers from the University of Leicester in the UK found that dairy cows produce more milk when listening to relaxing classical music. Now pianists Andreas Kern and Roberto Prosseda and violinist Fabrizio Von Arx have tested that theory in a 'Happy Cow Concert'. Watch them perform works including Saint-Saëns's Introduction and Rondo Capriccioso for their bovine audience.