Video: violinist Hilary Hahn knocks bridge over during a concert - and is helped by two luthiers in the audience 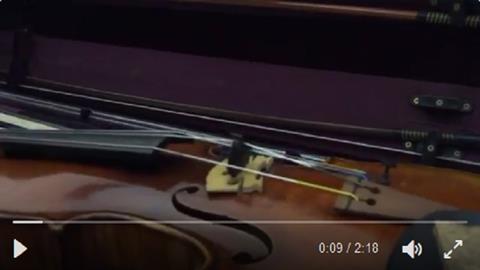 Hilary Hahn has posted video footage on her Twitter page of luthiers Peter and Wendela Moes re-fitting her bridge after a concert. The violinist managed to collapse the bridge while pushing her mute back on stage before her final encore. The two luthiers of Munich violin shop Moes & Moes happened to be in the audience for Hahn's performance.

'We're trying to put the bridge back in the right place so that the tone doesn't change too much,' says Hahn. 'It's kind of no big deal, but it's kind of a big deal!'

When u knock ur bridge over in concert & ur violinmaker friends #Moes&Moes happen to be there & ur filmmaker friend happens to record it! pic.twitter.com/oXcsAY0DIW