The special art of decorated instruments

The Strad Calendar 2014 features beautifully decorated instruments by some of the finest makers of all time. John Dilworth tracks the history of the noble tradition, through the makers featured 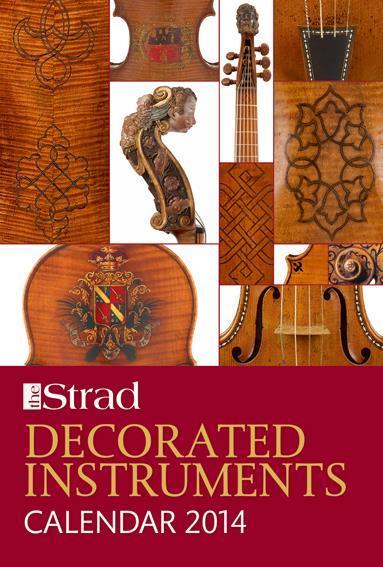 The Strad Calendar 2014 celebrates the practice of decorating instruments: a tradition that is even older than the violin. That’s certain. There must have always been something slightly mystical about fashioning a tool that could sing, and the urge to personalise and decorate anything and everything is human nature. It just so happens that the earliest violins we know are decorated, one of the earliest being Andrea Amati’s ‘King’ cello, dating from somewhere after 1532. The decoration, the royal arms of Charles IX of France, tells us that these instruments obviously represented the best work that Charles, or his commissioners, could find. Amati, it follows, was plainly already the finest violin maker in Europe by the mid-16th century. The local Lombard artist who painted the armorials on the backs of these instruments was however, little more than a tradesman himself. Attempts to recreate the worn artwork on Andrea’s instruments inevitably result in something rather crude and garish, not at all what we see now, in its faded and enigmatically ghostly images.

This is something that holds true for most attempts to remake the masterpieces of the past in a new form. Fully revealed, the dragon’s heads and intricate purfling, the startling colours of painted or inlaid work, almost always appear too sharply focused, too noisy, and rather unnecessary. Violins are generally admired for their beautiful, acoustically perfect form, not as a ground for exotic elaboration. From an early period, however, we have the magnificent Venetian lira da braccio by Francesco Linarol. The fabric of this 1563 instrument has been used almost as a noticeboard, with the bold motto inlaid in the ribs, which are stoutly carved with the back from a single solid board. The lattice patterns on the front are by comparison simplistic, but it is a style that was continued with enthusiasm by the Füssen and Allemanischer schools under strong Brescian influence well into the 18th century.

The finest, most admired viols (probably among the most intricately ornate examples) come from 16th-century London, exemplified by the tenor viol attributed to John Rose. Many viols contain even more intricate and exuberant decoration, involving poker work and staining as well as complex purfling, intricate heads and painted devices. These instruments were clearly destined to be status symbols for the wealthy amateur player.

The attribution of the wonderful c.1562 Gasparo da Salò violin, the ‘Ole Bull’, has been controversial in the past. There is no doubt, in my mind at least, that it is the authentic work of Gasparo. But that head! It looks charming now, but I suspect there would have been more than a little of the Disney about it when it was new. Craftsmen who could carve such heads would have been specialists – the organ lofts of Brescia are full of similar angels and cupids. I sincerely doubt that it was Gasparo himself who fashioned it, but rather, like the Cremonese painter of Andrea Amati’s masterpieces, a hired hand. Such instruments belong firmly to the era of the professional instrument maker, from the time in the late medieval period when society could support such a specialised trade, and when work could even then be profitably delegated to other craftsmen. A sophisticated business, in all senses.

In Cremona, the Amati family after Andrea generally ignored these excesses. There are a very few works of the Brothers Amati bearing painted armorials (the c.1595 ‘King Henry IV’ violin being one), but in the late work of Nicolò Amati appears the first actual inlaid decoration that I am aware of in Cremona. These few violins have a very familiar style to them; double-banded purfling, and one with ivory dots laid into mastic filler in between. Fleurs-de-lys and other subtle florid inlays in the ribs and scroll anticipate Antonio Stradivari’s own series of decorated instruments accurately. Indeed, there is a case to be made that Stradivari may have been apprenticed as a cabinet maker or ‘ebenista’, and that the young Antonio had a hand in these Amati violins.

Whatever the case, Stradivari’s decorated instruments are among the most subtle and effective of all. Perhaps by avoiding colour, and relying solely on the contrasts of black mastic and white ivory to embellish his already distinctively fine work, he demonstrates his artist’s eye, and his supremacy over his peers. The work was absolutely his own, albeit taken from a common pattern book, as Stewart Pollens has shown. The steady and practised hand is the master’s own, the manner of the inlay impossible to be added later by another tradesman. The instruments were undoubtedly a great success for him. They brought commissions from abroad, and certainly established him as in a league of his own. His influence is already seen in the delicately inlaid 1685 violin by Pietro Guarneri of Mantua, made a decade or so after the first ornamented Strads.

Apart from other traditions, the poker work and carved heads traditional to Hardanger fiddles, the lion and dragon-headed violins of northern Europe, most decorative work on violins has been imitative, by and large of these two ideas: either the painted armorials of Andrea Amati, or the embellished purfling and mastic inlay of Stradivari. Jean-Baptiste Vuillaume enthusiastically copied Andrea’s style in his series of painted instruments, but luthiers still make it a matter of honour to try and copy Antonio’s brilliant conception.

Today though, the tradition is in decline among violin makers. Decorated instruments have a poor reputation among players. They don’t want to stand out from the crowd, or risk the fragility and buzzes and rattles that inlays are associated with. But the skills are very much alive, and luthiers in the early music field have a wonderful opportunity to demonstrate their skill and artistry. But is it just showing off, as they presumably were in the past – an attention-grabbing device, or a genuine compulsion to create new and vibrant variations on a classical form?