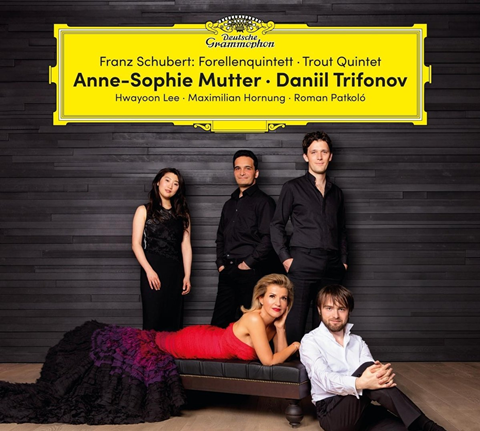 All-star ‘Trout’ Quintets are not uncommon but this one lists a little to one side in favour of DG big guns Anne-Sophie Mutter and Daniil Trifonov. That goes for performance as much as presentation. There is plenty of grandstanding in the piece, mostly from Mutter who doesn’t just crown the unisons that take root at 8’15” in the quintet’s opening Allegro but pretty much obliterates them. Her trills in the variation movement are all jazz hands and she absolutely calls the tune in the finale.

She’s indisputably an iconic player, she has the top line, and her playing is often gorgeous (particularly when she adopts a veiled tone and deploys classy portamento in the excerpt from Schwanengesang, and shows her plaintive richness low down in the ‘Ave Maria’). Still, one sometimes misses the sense of a team performance in all but the work’s most bustling apexes and Mutter’s overt display can border on aggression.

As for Trifonov, though he’s never really aggressive, it’s much the same: some lovely keyboard sculpting (not least in the quintet’s Andante) but some fussiness too that I don’t hear in Yefim Bronfman’s RCA collaboration with Pinchas Zukerman, Jethro Marks, Amanda Forsyth and Joel Quarrington. There is no lack of talent, although sometimes a lack of presence, from the other players but the uneasy vibrato harmony at the start can suggest they needed a bit more time to find their equilibrium. Fine, but not a world-beater.